THE LAW OF THE STRONG: that is our law and the joy of the world.

Whatever you think of those articles of belief — and most people find this strange mixture of anarchism and fascism a bit strong for their palates — you will hardly disagree that they are political statements. Whether you regard them as the ultimate extreme of right wing laissez faire or the logical extreme of left wing rebellion against the state and all other ruling elites, they are certainly an extreme of something and they are political.

But these are not the platforms of any political party. They are the philosophy of an occult secret society, devoted to magick and mysticism, allegedly founded by the 10th Century Sufi martyr, Mansur el Hallaj. The society claims to have numbered among its members such illustrious gentry as Paracelsus, Goethe, Richard Wagner, Nitzsche, Richard Burton (not Liz’s ex, but the 19th Century Burton who translated the Arabian Nights and founded the Royal Anthropological Society) and the notorious Aleister Crowley.

The secret society is named Ordo Templi Orientis (OTO). Historians of the occult disagree heatedly about how old it really is, how many of the famous “members” listed above really belonged to it, whether it is actually derived from Sufism, etc.

A few facts about the OTO, however, are beyond dispute. Aleister Crowley really was a member, ran all the English and American lodges from about 1900 onward and became “Outer Head” of the whole order in about 1920. (The “Inner Head” is allegedly, an extra-terrestrial, or extra-human, intelligence of no known address.) And it is also beyond doubt that Adolph Hitler hated and feared the OTO with a strange passion, which led him to place the entire German membership in concentration camps and outlaw the whole organization.

Hitler may have been worried about the overt encouragement of tyrannicide in the ninth of the OTO principles quoted above “Man has the right to kill those who would thwart these rights.” Or he may have regarded the occult arts of the OTO as threatening, or interfering with, the occult arts practiced by the Nazis themselves through the infamous Occult Department (Ahnenerbe) under the directorship of Heinrich Himmler.

All this may seen to be of only historical interest. It isn’t. The alleged use of “psychic shields” by the CIA (to protect Gerald Ford against mind readers), as reported in the L.A. Times, the Barb and other papers in the last week of July, is part of a millenium old occult warfare which was once universally recognized. As Berkeley’s black poet-laurette, Ishmael Reed, said in his hilarious and profound novel, Mumbo-Jumbo, “The history of the world is the history of the warfare of secret societies.” 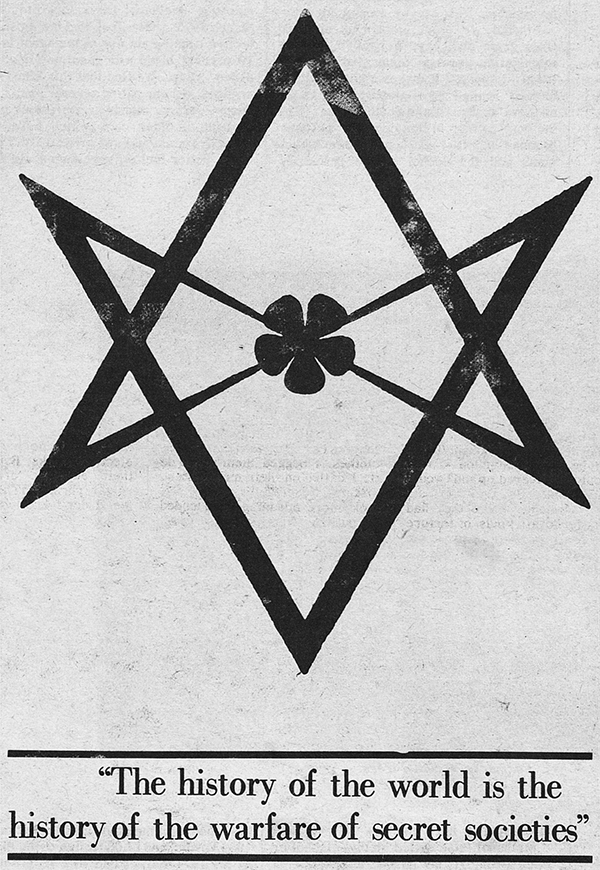 Two or three centuries ago, everybody knew about this warfare. The Holy Inquisition was the Drug Enforcement Administration or FBI of the Establishment magicians in Rome. The nine million women, homosexuals and “heretics” killed by the Inquisition were either members of, or had the bad luck of being accused of being members of, various secret societies practicing rival brands of magick. These included matriarchal and paganized witch covens, the Knights Templar (who allegedly brought Sufic magick into Europe and founded the OTO,) and the mysterious “brothers and sisters of the free spirit” which eventually evolved into the revolutionary Freemason and Rosicrucian societies of the late Renaissance (not to be confused with the tamed, or domesticated, freemasons and rosicrucians of this century.)

Nine million dead is a large figure to be attributed to churchly paranoia or hysteria. Ever since Dr. Margaret Murray’s epoch making Witch-Cult in Western Europe (1922) increasing numbers of historians and scholars have come to agree with Dr. Murray’s thesis that the witch hunts and heresy hunts were aimed at a real enemy (or an assortment of real enemies) persons practicing occult arts and believing occult philosophies at variance with Christian orthodoxy.

This subject was ignored or trivialized from the late 19th Century until the 1960’s, since “all educated people” believed, then, that there were no occult powers, no “real magick.”

The breakthroughs in Russian parapsychology, when publicized in the mid-1960’s, led the U.S. government to spend an unspecified sum — as high as $200,000,000, in some accounts — to catch up. It is now obvious that occult energies are as real as electrical or nuclear energies and that those who want to rule the world must stay ahead in occult sciences, as well as in other sciences.

We now know, through rigorous research, that at least some human beings, at least some of the time, exhibit the powers called extra-sensory perception (ESP), psychokinesis (PK), clairvoyance, clairaudience, precognition, etc. Some of the best scientists in the field, especially among the Russians, believe that all human beings have these powers in a latent state and can be trained to develop and use them.

Adolph Hitler’s “evil genius” has been vastly over rated (Madison Avenue and Tricky Dicky Nixon have shown a shrewdness equal to his in exploiting paranoia and gullibility) but he was intellectually ahead of his time in appreciating the politics of occultism. It is ironic that British Intelligence, which hired its own occultists during the war, was incapable of understanding what Hitler was actually doing and used these psychic experts only to predict his next military and political moves, not to take psychic action against them.

How many bureaucracies, in today’s governments, have caught up with Hitler and realize that occult powers, like other powers, can be used as weapons? Aside from the published psychic research in Russia and America, how much is “top secret” or “classified” and relates to either hot or cold wars or to the control of populations and surveillance of heretics?

Nobody without a security clearance can make an intelligent guess as to the answers to those questions.

Even more worthy of investigation (and virtually unthinkable as recently as five years ago) among the various occult secret societies outside government, who are the “good guys” and who are the “bad guys”? The OTO has frightened many other people beside Adolph Hitler. There is a whole school of right wing conspiracy freaks who believe that the OTO (and/or the Bavarian Illuminati, which is allegedly the Inner Circle of the OTO) are the “bad guys” behind every catastrophe in modern times. Should left wingers follow a kind of knee jerk reflex and simply reverse that, assuming the OTO are the “good guys”? Or is the story more complicated than that?

Once one turns over the psychic rock, a lot of squirmy questions of that sort come rushing out. What is the political meaning of the witchcraft revival? How much power is there, really, in Anton Szando Lavey’s Church of Satan? Are the mysterious (and continuing) cattle mutilations in the midwest part of somebody’s (continuing) effort to achieve a major occult effect by “blood sacrifice”?

If Matthew Manning, English psychic, is not exaggerating the degree of coercion and extra-legal force used by the English government to attempt to dragoon him, a pacifist, into war related work (see “Part One” of this series) how many patriotic and non-pacifist psychics are currently working for various governments?

These are melodramatic questions, which cannot be taken seriously except by those who have had enough personal experience with PSI powers to know that we are talking about things as real and dangerous as nuclear bombs.

According to Steve Erdman, in the occult magazine, Green Egg, the cattle mutilations mentioned above (which have criss-crossed the midwest from as far north as Michigan to as far south as Texas) may be part of a government plot to create anti-occult hysteria (a new “witch hunt” …) which would allow the rounding up and incarceration of those occultists who either won’t work for the government or might work against it. This is not totally fantastic to those who remember how Hitler incarcerated the OTO so his own Occult Department could work without interference.

In mid-July, on Oakland’s Channel 2 Uri Geller clearly caused a key to bend without any visible physical force. To attribute this to fraud, one would have to assume that the camera crew and staff of Channel 2 were co-conspirators. Worse yet, scientists at Stanford and elsewhere have insisted that Uri has performed this classical magick mind over matter feat under laboratory conditions where no fraud was possible. Saul Paul Sirag, one of the Bay Area’s most brilliant young physicists, is one witness who will tell any remaining skeptics about the controls that prevented fraud in the Geller tests that he observed. Dr. Brian Josephson, a physicist with a Nobel Prize, is among many scientists who testify that Matthew Manning has performed the same “miracle” under equally rigorous control conditions.

It does not take much imagination to see that Geller or Manning might cause an ICBM to fire unexpectedly, or to refuse to fire when war is declared …

I have been investigating these matters since 1968, at first as research for a fantasy trilogy (Illuminatus!, soon to be published by Dell) and then, after I realized it was not all fantasy, as an increasingly concerned student of the occult. I have no security clearance at all (much less “Top Secret”) but I have some very educated guesses about all the rhetorical questions I asked above.

Some of those answers and the evidence that led me to them, will be the subject of the next two articles in this series. 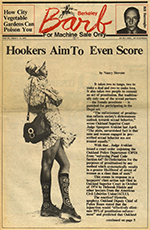