A British parapsychologist with a string of academic credentials long enough to choke a horse and a young mind-reader described by the Continental press as “the English Uri Geller” are preparing a book they claim will be “the Watergate of the occult world.”

The parapsychologist, Dr. Peter Bander, editor of Psychic World is an expert on criminology as well as ESP and spook stuff. He is alarmed about growing signs that governments are moving in on the psychic world, monopolizing it and perverting it toward a new kind of international terrorism even worse than the nuclear arms race.

The young psychic, 19 year old Matthew Manning, is equally concerned and has demonstrated powers that make him even more astounding than Uri Geller. Some have even said that he’seems to have all the psychic abilities of Geller, of clairvoyant Peter Hurkos and of Edgar Cayce combined — and perhaps, even more.

Like Geller, Matthew Manning can bend metal and change its molecular structure without touching it. He has demonstrated this to several scientific groups and, after observing Manning perform for the New Horizons Research Foundation in Toronto, Nobel Prize physicist Dr. Brian Josephson exclaimed, “A redefinition of reality and nonreality is needed now … We are on the verge of discoveries which may be extremely important for physics. We are dealing here with a new kind of energy.” 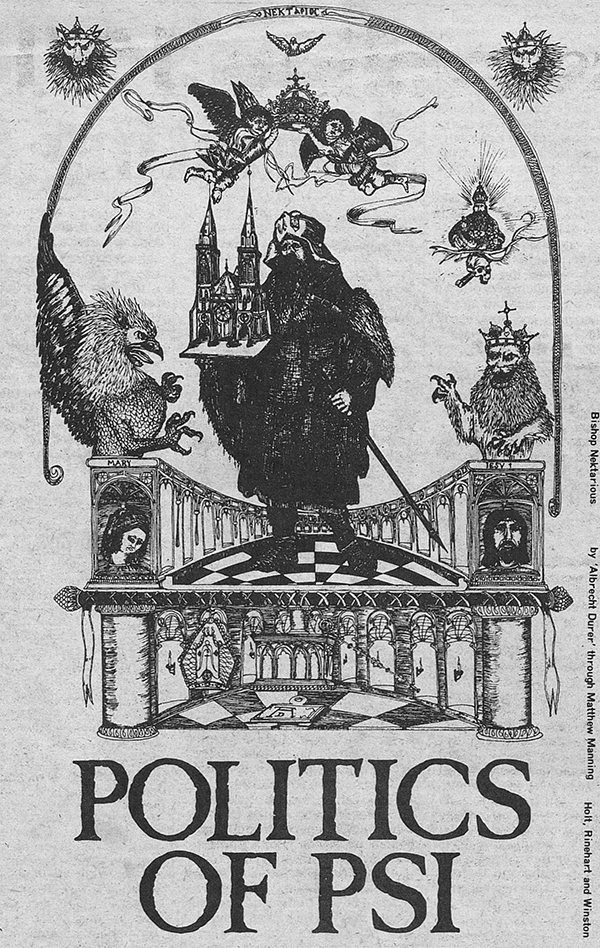 Like Hurkos, Matthew Manning can read minds at a distance and (according to tests by Prof. Hans Bender in Germany) with a greater accuracy than ever recorded by any other psychic in the history of parapsychological investigation.

Like Cayce, Matthew Manning can diagnose and prescribe for patients he has never seen, although he has no training in medicine. (Unlike Cayce, Manning has learned the identity of the “entity” working through him in these medical miracles. It calls itself Dr. Thomas Penn, but “Penn” has never revealed whether he lived in the .past, in the future, or in another dimension.)

Matthew has a bundle of other documented “wild talents.” He can produce automatic drawings in the styles of Picasso, Durer, Goya and other masters; write in languages he has never studied, such as Arabic, Japanese and Russian; cause knives, vases and even heavy beds and dressers to float around like ballerinas. He also received messages from various dead saints of the Greek Orthodox Church (some of them containing information known only by Archbishop Athenagoras, who takes these messages very seriously), from 503 past inhabitants of the village in which he lives and from entities who signed themselves in as Samuel Pepys, Winston Churchill and even agnostic Bertrand Russell (who has changed his mind naturally enough about personal survival after death.)

To top it all off, on three occasions when Kirlian photographs were taken of the energy unleashed by Manning, the Kirlian machines were blown out.

I met with Matthew Manning and Dr. Bander during their recent visit to the Bay Area to plug their current book, The Link (Holt, Rinehart, $7.95.) Although impressed by the scientific reports on Matthew included in the book, I asked for a personal demonstration.

Matthew went to one end of the hotel room and I went to the other. I started to draw a sketch which he attempted to pick up telepathically. I considered a star, but couldn’t decide whether to make it one point up (White magick) or two points up (Black magick) and instead drew a tetrahedron.

Matthew showed me his sketch. He had drawn the one point up star, the two point up star and two tetrahedrons interlinked.

We tried again. I drew a pair of concentric circles with two dots inside the inner circle.

Matthew, across the room, drew a pair of concentric circles with a series of dots in between them.

I next asked for a consultation with the mysterious Dr. Thomas Penn, who diagnoses on the basis of birthdays only. Unfortunately, I slipped up and instead of giving the birthday of my eldest daughter, as I’d intended, I gave the birthday of my second daughter.

He wrote several lines which applied to neither daughter but they all applied to me. He duplicated in exact detail the diagnosis of my lower leg problem recently given by an orthopedist. 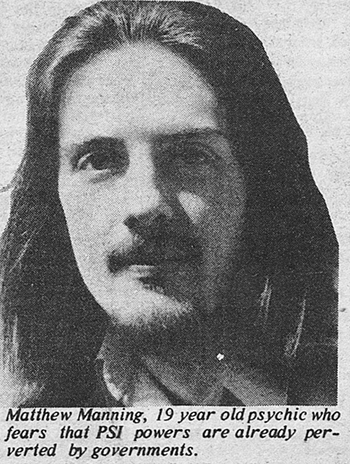 Dr. Bander has been a friend and counsellor to Matthew Manning (and his occasionally worried parents) ever since Matthew’s powers first appeared, in the form of poltergeist disturbances, when Matthew was 11 years old.

I began discussing the scientific implications of Matthew’s powers with Dr. Bander and somehow we got onto the subject of government persecution of dissident scientists. Among those discussed were Dr. Wilhelm Reich, who was jailed as a fraud when he discovered the bioenergetic field in the 1950’s only to be posthumously confirmed by Kirlian photography in the Sixties, and Dr. Timothy Leary. (currently among the missing.)

Dr. Bander then dropped a little bombshell. He told me about the new book he and Matthew are preparing which he described as “an occult Watergate.”

“The real truth about governments and occult science will be even bigger than Watergate,” he said grimly.

Among other things, Dr. Bander said, the book will deal with attempts to force Matthew to work for the Ministry of Defense; which Matthew, as a pacifist, refused.

Shortly thereafter Matthew was persuaded to perform for scientists at London University, only to discover that they were operating under a grant from the Ministry of Defense. Matthew and Dr. Bander indignantly withdrew.

After this incident Bander issued a public statement saying:

“Neither Matthew Manning nor I intend to work under the auspices of any defense organization and/or participate in experiments which could conceivably become ‚classified information.‘ We believe that any gifts of abilities which may be discovered should be made known and available to scientists and be used for the benefit of mankind.”

That was when the real trouble started. Dr. Bander claims that agents of Scotland Yard’s Special Branch have infiltrated his business office under fake credentials representing themselves as scientists. Furthermore, he asserts, his phone has been repeatedly tapped, veiled threats against Matthew have been made by government officials, the CIA has been investigating and trailing them around and a letterbomb has been sent to Matthew.

Matthew confirmed all this for me and implied that there was much more of the same, which they don’t care to release at this time. “The Ministry of Defense wants to control these powers and use them destructively,” he charged flatly. (A week later, Uri Geller gave precisely the same warning on the “All The People” TV show over Channel 2, Oakland.)

Matthew added that he had been cajoled into a private demonstration of his powers for Lord Rothschild, chairman of the Think Tank (real name, not slang), the English equivalent of our Rand Institute, where War Games strategy is decided. Lord Rothschild later denied that such an interview/demonstration had taken place. Dr. Bander showed me a letter, on the letterhead of Lady Teresa Rothschild, requesting Matthew to meet with Lord Rothschild.

This is especially interesting to those who believe in the theory of the Round Table conspiracy, allegedly founded by banker Cecil Rhodes in 1888. According to this theory, the Rothschilds, acting through the Royal Institute for International Affairs, and the Rockefellers, acting through the Council on Foreign Relations, have largely staffed the English and American governments with their own hand picked servants all through the 20th Century. Oddly, both the Birchers and the Weather Underground have published documentary exposes of this “conspiracy.”

The real pressure on Matthew Manning to force him to work for the government began after the tests by Prof. Hans Bender in Germany. These tests showed that Matthew scored higher than any previous psychic in reading the minds of subjects over ten miles away.

According to Dr. Bander, an English official told him that since his home was only five miles from Checkers (the Prime Minister’s country estate) there could be no more internal security until Matthew became a government employee. Dr. Bander insists that this was accompanied by an implied threat in the form of a remark about how many young people die in auto accidents every year.

An interesting chronology appears in the following:

1956 — Dr. Wilhelm Reich, after years of persecution by the AMA, is finally hustled off to jail, right after announcing his contacts with UFOs. He quickly dies of a heart attack, which some of his admirers still claim was suspiciously opportune for his captors.

1953 — The CIA dictates to the Air Force that a negative and skeptical policy on UFOs must be adopted. Maj. Dewey Fourno and Capt. Ed Ruppelt later leave the Air Force and subsequently announce that the evidence collected by Project Bluebeard supports the extraterrestrial hypothesis of UFOs.

1971 — Dr. James E. MacDonald, who had been at the 1953 meeting in which the CIA browbeat the Air Force into the negative UFO position, and who thereafter fought long and hard to have the relevant documents declassified, is found dead of a gunshot wound. Verdict: suicide.

1973 — Uri Geller, after being accepted as genuine by several scientific groups in a dozen nations, begins to talk about his extraterrestrial contacts and their attempts to promote world peace. The Rockefeller owned Time magazine launched a long vendetta against Geller, alledging that he is only a stage magician, and that the many distinguished scientists who have endorsed him are incompetent clods.

1973 — Dr. Timothy Leary announces his contact with extraterrestrial higher intelligences via telepathy. Dr. Leary is removed from the prison system and held incommunicado ever since.

1975 — Saturday Review Press and Dutton, two respectable and unsensational publishers, release The Mothman Prophecies, by reporter John Keel. Keel, in interviews with a number of UFO contactees, receives basically consistent portraits of the alleged “Men in Black” who have been repeatedly described in sensational tabloids. The “Men in Black” have been intimidating UFO contactees, seizing evidence, and breaking laws for over three decades now, and Keel does not think they are a hallucination of the “kooky” contactees. What government bureau is able to act above the law in this way and even treat the Air Force and FBI with contempt?

I have had it on excellent authority that for some years now, the U.S. government is heavily involved in research using psychics and “sensitives” for war-like purposes. One of my sources is Isaac Bonewits, first man to graduate from University of Cal. with a degree in magic and editor of the nation’s largest selling occult newspaper, Gnostic News. The other is a Ph. D in physics who has asked me not to use his name. Both tell basically the same story: the research is heavily funded. Top Secret, has produced amazing results and goes hand in hand with a policy of discrediting or harassing occult researchers who won’t join the War Game.

If Matthew Manning and Dr. Bander blow the roof off the English end of this, then the American end will start to blow up, too.

The C.I.A. probably isn’t reading your mind yet; but they almost certainly are trying. 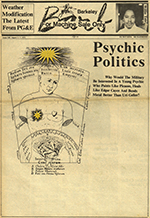 Politics of Psi
by Robert Anton Wilson appeared in the Berkeley Barb, Issue 520 in August 1975.