Why is Dr. Timothy Leary in Prison?

Dr. Leary is in prison because his bail has been set so high that he cannot pay it and get out while his case is under appeal.

Nobody accused of the same “crime” as Dr. Leary (possession of less than one ounce of marijuana) has had such a high bail in living memory.

Why was Dr. Leary’s bail set so high? Because (in words of the judge who set the bail and refused to reduce it) Dr. Leary’s scientific and religious ideas are “dangerous.”

THIS IS A VIOLATION OF THE U.S. CONSTITUTION. the Constitution states flatly that men and women in this country may not be punished for their scientific or religious ideas – not by jail, not by high bail, not by any legal action at all. In fact, excessively high bails are explicitly forbidden in the Constitution.

So: there is no doubt that Dr. Leary’s constitutional rights have been violated, and that he is being punished beyond the law for having ideas that the judge did not like.

Does this concern you?

Yes, very definitely. As columnist Mike Royko once noted, “There is a democratic principle about injustice: If enough people support it, they’ll ALL get it.”

In 1956, the U.S. government jailed Dr. Wilhelm Reich and burned his books in an incinerator in New York City. Only 18 scientist in the whole country protested, because Dr. Reich had been offensive and arrogant in presenting his theories.

Throughout the 1960’s, the government warred against all doctors who believed in the krebiozen cancer treatment. Many of these doctors were harassed, a few were put through the expense and agony of long court trials. Again, few scientists and teachers protested: Dr. Ivy chief exponent of krebiozen, had offended the Establishment by speaking too frankly and angrily about his critics.

Today, health food and vitamin therapists are under attack.

Every scientist, every doctor, every teacher, every writer and scholar, every man or woman with an unpopular idea is a potential victim of government orthodoxy, if we do not defend the Constitution and demand that punishment of researchers be stopped, however radical their theories may be.

The fight for Timothy Leary’s rights is the fight for mind itself, for our right to think, to publish our thought, to sneak out.

The civil liberties you save may be your own. In the wake of Watergate, how sure are you that they’re not already bugging your phone or watching you? 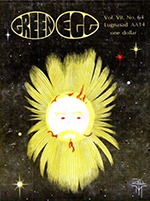 Why is Dr. Timothy Leary in Prison?
was a circular letter (1973, one receiver was William S. Burroughs), written and sent out by Robert Anton Wilson and also appeared in Green Egg, Volume 7, whole number 64 in August 1974.