Lawrence Talbot came down the stairs into the laboratory.

“My name is Harry Haller. The name of the game is Kadath.”

Buzz-saws, boxes of dynamite, whips, Ku Klux hoods and electronic machinery. Talbot tried to make out the figure in the shadows of the room.

“An experiment in Authority and Submission,” the buzzing voice whispering. “The creation of a humanoid robot — ” President Cthulhu said, “I am the Hiroshima Werewolf” — the doctrine of the bandits Thantatos Equations — The guilt in the eyes of the victim like bootheels snapped together in obedient salute — I am the werewolf bridge dammed up at the center of aggression — The fear of death is not necessary to Nature. One night I was walking in the zoo, and I seized a swan and cut off her lovely neck. Seizing the stump, I sucked the blood and as it gushed into my throat I experienced orgasm — Things were coming to decisions like that —

What do we really want from them? Is DeSade more right than D.H. Lawrence? What drove Garbo into hiding, Monroe into suicide, what struck Harlow down and sent Garland into the bottom of the booze bottle?

The bridge to drown me — things are really fucked up — An old woman in Detroit, Alice Hertz, set herself on fire —

Authority — the institutionalization of power and torture against which Sade rebelled — is a function of coding, of game rules. “Die gedanken sind frei,” sang the Bundshuh after the defeat of the peasant’s rebellion (Robin Hood in Germany, the old rural anarchism of Europe). No: the thoughts are not free. This is the whole secret of authority-and-submission. Die gedanken sind nicht frei. Men have risen armed with stones and rocks (East Berlin, remember?) against tanks; men have also submitted dociley to the weakest and most tottery authorities. It all depends on the extent to which coding distorts perception, the extent to which “the thoughts are not free.”

“Look at Batman,” he said. “There’s my hero in disguise. The Low Camp equivalent of my High Camp Count.”

Well, yeah — I said — I know what the insiders say about Batman and Robin, but …

“You need Joyce’s juices,” he said. “Remember his give-away in Finnegans Wake? ‘Let’s root out Brimstoker and give him the thrill of his lives’”? The devil’s brimstone is never far from the enthrallment of the mystic.

Wait, wait — I cried — this is getting too deep for me. Were you, or were you not writing about homosexuality in disguise?

And he answered, “Truth is the dog beneath the skin; he must be whipped out, while Lady my Bird may stand by the napalm fire and stink.”

And the line went dead with a ghoulish click like the cell doors closing at the Reading Gaol.

The sign of the werewolf: hair growing in the palms.

The sign of the masturbator: hair growing in the palms.

The werewolf, then, is a Freudian symbol of the masturbator? Not quite. First we must understand why Billy Budd shouted “God bless Captain Verre!” as he was hanged. For everything in our civilization leads back to hanging, the ultimate sign of the State’s authority, the most naked form of the Orgasm-Death Gimmick. 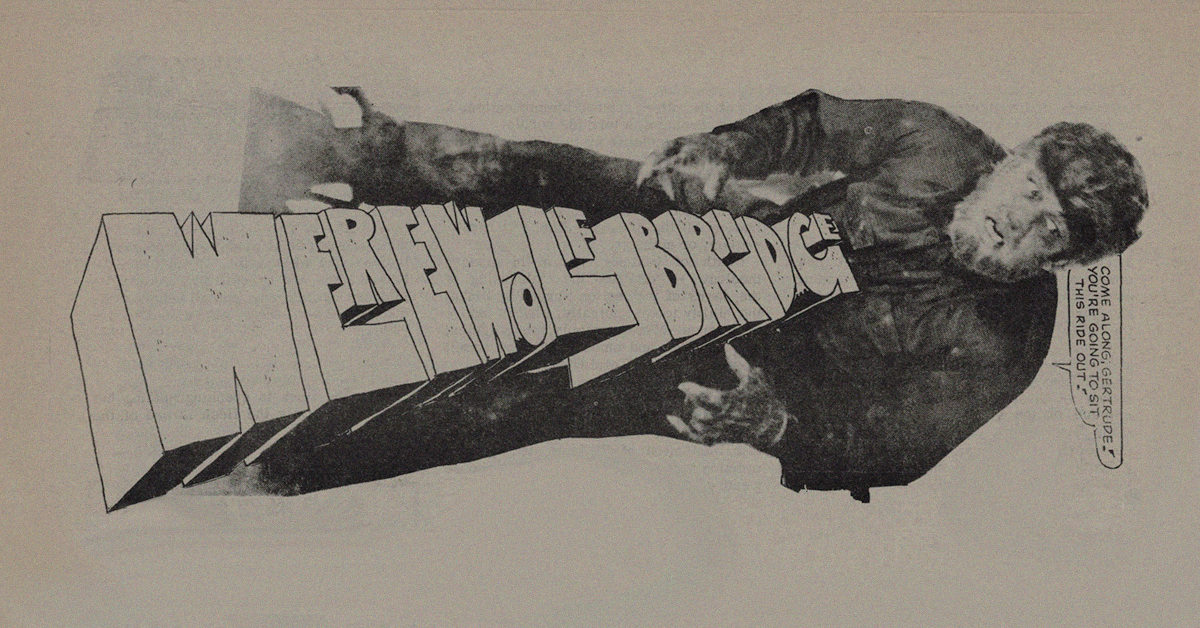 Harry Rumbold, Hangman-God … whom the most Roman of Catholics calls Dio Boia … carefully adjusts the noose …“ Step right up, folks; see this here young boy come off like a sky-rocket … The only authorized orgasm in his whole life …” The trap is sprung … Budd shouts “God bless Lyndon Johnson” and his cock spurts and his neck breaks … his sperms showers the Three Marys, and Pilate washes his hands in it … “Mightiest of all is the great sperm whale” pronounces a disembodied voice … And Captain Ahab screams, “Be the Viet Cong principal or be the Viet Cong agent, I will wreak my vengeance upon them. They cut off my fore-skin … I mean, my leg … I don’t know. Miltown … librium … tofranil …”

“My name is Harry Haller. The name of the game is Kadath.”

Buzz-saws, boxes of dynamite, whips, Ku Klux hoods and electronic machinery. Talbot tried to make out the figure of the shadows in the room.

“An experiment in Authority and Submission,” the buzzing voice was whispering. “The creation of a humanoid robot –”

“The vampire mob made another raid on the blood bank,” the other figure was muttering. “We are going to have to be more careful.”

“My name is Harry Haller,” Talbot repeated. They went on ignoring him.

“A fresh supply of cadavers is absolutely necessary –”

Daughter flees in terror from father’s disfigured face as we resume bombings — Zero is the class which has no members — The Machine is elaborately described, and some schizophrenics actually find telepathy — Only the Nietzsche-Naziubermensch, in his provincial apotheosis as Clark Kent, can know to whom the voice of the invisible Shadow belongs — “George Eliot” is a woman — I do not fear the eyes of the wounded — This is a war to the finish — Good against Evil — the Elite against all you dumb mother-fucking Lemmies — All history can be reduced to one sentence: French Canadian bean soup — “George Eliot” was a pseudonym — the class of all classes which are similar to a class is the number of that class — “George Eliot” is being mentioned but not defined — The meaning of life is the meaning of French Canadian bean soup — Come in under the shadow of this red rock and I will show you Secretary of State Dean Azathoth in the eyes of the wounded — Learn the right habits and stay healthy!

“It is impossible to overestimate the importance of the idea ‘A child is being beaten’” (Freud, A Child is Being Beaten. Collected Papers, Vol. IV) — South Vietnamese paratroopers quelling Saigon riots of 2000 young Buddhists corner one outside Buddhist Institute and beat him to ground — The third phase is like the first, only the figure of the child who is being beaten no longer appears in it — Clerical status spared him arrest in child-molesting case — “My father does not love this other child, he loves only me.” — Message Megadeath —

The total biological person becomes a player in each of these games, and the self-knowledge of the person is defined in terms of the roles played in these games. The Ego, then, consists of the total configuration of all the roles played in social games, and is structured and reinforced by the rules, rituals, strategies, language, goals, values, characteristic sequences of movements and typical space-time locations of the games. The coding of these game-patterns into the brain makes up the few million habitual channels which are normally used in social life. When a psychedelic chemical, or an abnormal strain on the total biological person caused by sensory deprivation, Rite of Ordeal, immanent death, or any similar raw shock, opens up some of the 102,150,000 habitually unused channels, the Ego is submerged in an ocean —

“Negative reinforcement. The whip everytime he tried to initiate an autonomous act …”

The room was littered with used condoms, bottles of vaseline, autographed photos of President Cthulhu —

“I am Creation and Destruction,” she said.

As we resume bombings, your brain is my brain — My will is yours — I Giant Disfigured Face give the orders — Nice Doctor Frankenstein ask nice Doctor Herman Kahn to give you a soul — corpses are set to banquet to punish them every time they try it — Punishment! That’s the only thing they build alternate headquarters as H-bomb “insurance” —

One of the figures came limping forward. “I am Igor,” he said — with a start, Talbot saw that his neck bore the scar of a hangman’s rope. “This is the headquarters of the Joint Chiefs of Staff. What can I do for you?”

“The name of the game is Kadath,” Talbot repeated the signal.

“Ah,” the man with the twisted neck reacted at once. “You have the new napalm formula?” His eyes were burning and he rubbed his penis through the cloth of his dungarees.

Fear — In every voice the growth of slums — and the smell of poverty comes piped-in banquet in the womb — bloodshot and red — American life bomb so fair — Go dig it so cold, so pale — The name of the game is Billy Budd — at the Saint James Infirmary —

Burn, baby, burn, on pink paper from Watts, L.A., — She moaned softly, “Oh God oh God oh God” — Whose eyes call you as the eyes of the Thunder said: “Best gimmick is total assault on the senses.”

This angel who is now become a Devil provides an excellent excuse for Giles de Rais, Jack-the-Ripper, the Mad Bomber — and even leopards sniffing the same Biblical texts every time — “Don’t make dirty-dirty in Vietnam” — The city plunges into your shadow rising to meet you — Cheaper goods and priests — Punishment and pain thus become the two keys to the character of civilized man — The social cemetery makes 100 at random —

“The vampire mob made another raid on the blood bank,” the other figure was muttering. “We are going to have to be more careful.”

“My name is Harry Haller,” Talbot repeated. They went on ignoring him. “A fresh supply of cadavers is absolutely necessary –”

Every tribe chooses to encourage certain games and discourage others. The head-hunting game is given great status and “religious” meaning in some tribes, and regarded as a worthless and evil pastime by other tribes. Some games are compulsory, like the witch-burning game in medieval Europe. Some games are not compulsory, but so popular that virtually everybody participates in them, like the Grand Opera game in Italy. Some games are discouraged, but not forbidden, like the pacifist game in America today. Some games are absolutely against the law, like the homosexuality game throughout Occidental civilization. Every game, then, exists somewhere on a scale between the sacred and profane. Those games which are most sacred become institutionalized into laws. Those games which are closest to this sacred end of the spectrum, but not completely sacred, are institutionalized as dogmatic mores and prejudices. Those games which are profane are left to the preference of the individual, who can play them or not, as he sees fit.

The eternal struggle between Authority and Liberty is a struggle for the desacrelization of society.

Let us offer a huge simplification, a Last Judgement, a terrible verdict:

The choice before us is Death of Earth, or Death of God.

Death of Earth — a term used in war-game strategy — denotes thermo-nuclear war carried to its extreme: the sterilization of the planet. The end result, sadism, or authority.

Death of God — a term in modern theology — denotes the “cleansing of the doors of perception” urged by Blake: the ability to see, actually, what is before one’s eyes. Minus symbols, minus games, minus Tabco and anxiety, the end result of sadeanism, or Total Disobedience.

“Is this Iron Mountain?” Talbot asked, loudly. “Have I found the right place?”

“Negative reinforcement. The whip everytime he tries to initiate an autonomous act …”

“Did you strike the children under your care?”

“Which roused you more, a boy or a girl?”

When a human being is born, society delegates a special group to train him in the local game. This coaching group may be, as in Occidental culture, the biological parents plus the State school; or, as in Polynesian culture, the mother and her brothers; or, as in Russia, the State school alone; or as among some American Indians, the whole tribe. In any case, the local games are carefully taught and reinforced by rewards, and all behavior incompatible with these games is discouraged in various ways. To the extent that the local games are sacrelized, the discouragement will take the form of cruel and chronic punishment. 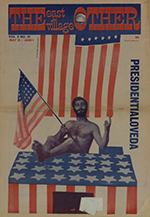 This version of
Werewolf Bridge
by “Kevin O’Flaherty McCool” (mosprobably Robert Anton Wilson) appeared in The East Village Other, Volume 2, Issue 12 in May/June 1967.