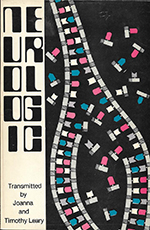 According to popular belief, Dr. Timothy Leary is a victim of his own enthusiasm, a permanently brain-damaged LSD freak who was once a first-rate scientist but who is now hopelessly adrift in messianic fantasy. It doesn’t matter that defense psychiatrists at his April 1972 trial testified that his sanity is unimpaired, his IQ one of the highest they ever measured, and his creativity literally the highest ever measured anywhere; defense psychiatrists are not widely trusted. It doesn’t matter that the recent film, At Folsom Prison with Dr. Timothy Leary, shows a remarkably warm, humorous, unfanatical man; the legend of Leary-the-Nut is stronger than the evidence of our own senses. It doesn’t matter that Dr. Leary’s kidnapping in Afghanistan by American government agents under the direction of Messrs. Haldemann and Ehrlichman seems as illegal and unconstitutional as the rest of the Watergate Mafia’s activities; everybody knows Dr. Leary belongs in jail, even if it takes deliberate violation of international law to get him there.

It does’t even seem to matter to anybody that Dr. Leary’s own attorney has said, in awe, that this man seems unlike any other human being on earth today, strangely akin to Jesus and St. Francis of Assisi for he literally doesn’t hate his enemies. Attorneys are paid to say things like that.

Nonetheless, intelligent readers of Dr. Leary’s recent book, Neurologic (published, interestingly enough, by Level Press, the publishing arm of the Ordo Templi Orientis in California), are going to find it hard to believe that the author of such a work is deranged, dangerous, or in any way deserving of being held in a cage next to murderers, rapists, and burglars.

Ten years of “personal investigation of the human nervous system, aided by LSD and yoga” have led Dr. Leary to a new system of objective-subjective “neurologic” which he offers as an alternative to the one-sidedly objective “neurology” formulated without such internal experience. Just as his epochal Interpersonal Diagnosis of Personality (1959) operated on a level of abstraction so high as to include all previous psychological systems, yet remaining specific enough to include the Leary Diagnostic Scale which is now in wide general use, so too Neurologic incorporates existing neurology, psychology, and even genetics, as well as the key insights of the great mystical and occult wisdom schools of East and West.

(Dr. Leary himself gained admission to one of these wisdom schools during his exile in Switzerland, according to a recent letter to me. This was a result of experiments in telepathy conducted in the Sahara Desert on the site where Aleister Crowley and Victor Neuberg conducted their Enochian experiments in 1909. Dr. Leary was assisted by English poet Brian Barret and didn’t know until afterwards that he was actually repeating Crowley’s work on the same earth-level location sixty-two years later. Since then, what he calls “coincidence-synchronicities” between his life and Crowley’s have continued to dog his steps.) [More on this here]

According to Leary in his book Neurologic, human beings have seven potential neural circuits, only four of which are in general use in most societies. These first four, which create a “Newtonian” perception of a block-like space-and-time world, are our ordinary standards of reality. The remaining three circuits, which are still being formed by evolution, create an “Einsteinian” space-time-process view of reality and are, at present, only available to epileptics, schizophrenics, users of certain drugs, or adepts at the yogic and shamanistic arts. The human race of the future, Leary predicts, will regularly use all seven circuits. The achievement of this higher consciousness by all humanity is the “Next Step” spoken of by Sufis, the “Great Work” of the wisdom schools.

1. The Bio-Survival Circuit, going back to the dawn of life three billion years ago. This circuit controls advance (forward) and retreat (backward) and is imprinted in the first days of infancy. (According to this theory, childhood schizophrenia, or autism, is the result of heavy retreat imprinting caused by a hostile or unloving environment. Too much aggressive forwardness, then, is probably the result of early imprinting by a compulsive “Isn’t he cute?”-type of parent.)

2. The Emotion-Locomotion Circuit, going back to the first amphibians of five-hundred million years ago. This circuit controls dominant or submissive territorial behavior and other emotional rage-fear reactions. This is imprinted when the child begins toddling, with his or her appropriate role in the social caste and class game, and produces dominant habits in the master class, servile habits in the lower classes. Like Gurdjieff, Dr. Leary regards this circuit as mostly pernicious in modern humanity and thinks none of the higher circuits can be used until this one has been reimprinted with knowledge that virtually negates its basic glandular-mechanistic-robotic compulsiveness. To paraphrase, unless ye become as a little child again and remove those compulsive emotional imprints, ye shall not enter into the paradise of the later, higher circuits.

3. The Mental-Manipulative Circuit, which began evolving at least a few hundred million years ago and is still evolving. This is imprinted before age five and mediates the more precise muscular activities, especially speech. Proper imprinting produces dexterity and fluency; improper imprinting makes for clumsiness, timidity, inarticulateness, self-consciousness, etc. Due to taboo, the usual imprint is for dexterity and fluency in some areas, and Veblen’s “trained incapacity” in others.

4. The Socio-Sexual Circuit, dated around 2 million B.C.E. and imprinted by the first sexual experiences at puberty. This circuit controls courtship, strutting, display, mating, orgasm, and protection of the egg and offspring. It is hardly necessary to emphasize that Dr. Leary agrees with most other psychologists that the imprinting of this circuit in our society is far from ideal.

When these four circuits have been imprinted, the growing human is adjusted, by society’s definitions, to reality as it is thought to exist here and now. This imprinting process represents a partially necessary and partially superstitious narrowing of the infinite possibilities of the nervous system to a thin range of programs, often characterized by distrustful, conservative, repititious, mildly paranoid concepts perfectly adapted to most of the distrustful, conservative, repititious, mildly paranoid societies we have created.

All we know is what is in our nervous systems. The Newtonian three-dimensional space occupied by “solid” objects afloat in absolute time, etc., is the mirror of the ordinary imprinting of these four primordial circuits by most societies that have existed.

5. The Rapture Circuit dates to the first human societies of fifty thousand years ago. It is imprinted whenever epilepsy, schizophrenia, drugs, or deliberate training in yogic-shamanistic methods are activated to “stop the world.” This is the first Einsteinian circuit and is best known to marijuana adepts, Zen roshis, Sufis, some artists, Fechnerian introspectionists, and Reichians. In the Rapture Circuit, the mechanistic associations of the first four circuits (red is for stop, green is for go) are stopped. We enter neurological time (red is simply red and green is simply green). We participate in transcendental Beauty.

This is called “awakening” in many mystic traditions, because the first four circuits are always imprinted to deal symbolically with nature, by mechanistic associations well studied in behaviorism. Here, we waken from that symbolic world into the actual world.

According to Dr. Leary, this experience (which seems to correlate with Samadhi in the yogic system, as the opening of the Rapture Circuit correlates with Dhyana) can be described mathematically, though he agrees with earlier mystics that it cannot be expressed in words. The formulas are the famous Lorenz transformations used in general relativity, with number of neurons firing per second substituted for external velocity. In this Cosmic Consciousness, there is no past, present, or future, but only Einstein’s endless metamorphosis of light.

7. The Neurogenetic Circuit, the latest part of the nervous system formed by evolution, will not be complete until we are able to decode the DNA code directly, by introspection, as distinguished from the objective attempts of biochemists to decode it externally. Dr. Leary’s personal explorations, admittedly tentative, strongly suggest (as does the similar work of Dr. John Lilly, reported in The Center of the Cyclone) that life is an intergalactic phenomenon. Our local evolution on earth, seeded with DNA three billion years ago, is no more isolated from the whole than the words appearing on this page in your room now are isolated from my mind writing them thousands of miles away in space and time.

Dr. Herbert Muller, the geneticist, likes to blow conventional minds by saying that we are merely giant robots created by DNA to make more DNA. Dr. Leary, with an even less anthropomorphic perspective, suggests that the DNA is just a device of cosmic minds (or Mind) to form nervous systems which will evolve to knowledge of and participation in its universal purpose (or its universal game).

A synopsis such as this cannot do justice to the breadth, brilliance, and beauty of Dr. Leary’s system. I have omitted discussion of his heuristic proposals; but every claim made is carefully hooked into specific scientific proposals for testing and validation, as well as treatment for the recognized mental illnesses and the great unrecognized illness which is contemporary normal consciousness.

The way that Dr. Leary obtained his system—by self-experimentation employing both legal yoga and illegal chemicals—is still controversial. I personally feel that the first amendment was intended also to protect scientists and that as long as Dr. Leary experiments on himself, commits no crimes against persons or property, he should be allowed to continue and publish. Since this libertarian view is currently unfashionable, and space is limited, I will not pursue it, save to say that the writings of Jefferson, John Stuart Mill, and the late Justice Black among others seem to support this position in general.

However, even if Dr. Leary’s methods of research are in some sense a crime against the people, there can be no doubt at all that his ideas are constitutionally protected. Even a Supreme Court which conveniently defines erotica as non-speech in order to remove it from first amendment protection cannot decide whether or not Dr. Leary’s scientific-religious writings are non-speech. Ergo, the judge who sentenced him and refused to lower bail because he thought Dr. Leary’s published works were “dangerous,” violated the constitution. This and the illegal nature of the kidnapping of Dr. Leary last January are grounds enough to ensure his eventual release. Time, money, and public support are all his lawyers need to gain that result. The question is, How long must he sit in his cage before the inevitable reversal of his sentence?

Dr. Wilhelm Reich was jailed and his books were burned in the 1950s; his ideas then were as unpopular as Dr. Leary’s are now. Dr. Ivy, the krebiozen man, went through years of legal prosecutions. Today it is the turn of the health food and vitamin therapists. Tomorrow it could be any man or woman with new ideas in the field of religion or science. The Leary case does not just concern “acid-heads”: it concerns anybody with an original idea on any subject. 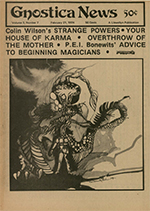