The Poet as Radar System

Forty years ago, Ezra Pound made his celebrated boast of the social function of art: “The artist is the antenna of the race, the barometer and voltmeter.” Allen Ginsberg* is nothing if not contemporary. He brings the boast up to date with a stunning effectiveness:

These lines are typical of Ginsberg’s unpolished-looking verse. He seems to work in poetry the way Rouault worked in paint: hacking his way savagely, with crude and sweeping strokes, toward an image of maximum ferocity. Look at Rouault’s “Three Judges,” those faces of moronic evil plastered on the canvas as if in rage and colored with the darkest, smeariest blacks and browns this side of downtown Passaic; this is the typical “feel” of a Ginsberg poem. Actually, of course, neither Rouault nor Ginsberg work in a frothing frenzy. Ginsberg in particular probably spends as much effort sounding “uncivilized” as Henry James ever spent in sounding “civilized.”

There has been little technical analysis of Ginsberg’s verse thus far; the job requires an ear delicate as Pound’s and the patience of an elephant. It generally takes me three or four readings aloud to feel my way toward Ginsberg’s music; his great bass, as Pound would call it, is strong as a Watusi drum, but, like a Watusi drum, full of surprising polyrhythms and unexpected variations. I have heard that the poetry reviews in the Saturday Review, New York Times, etc. are actually written by machines; and, from the reviews Ginsberg has gotten in those and similar publications, I would gather that the machines in question, like most university poetry teachers, are not yet capable of following a meter more challenging than the traditional umpty-umpty-umpty (followed occasionally by umpty-umpty-UMty.)

Let’s take a closer look at one of Ginsberg’s oral constructions. A poem is a statue in sound, or “frozen architecture,” or anyway you slice it it’s basically a structure, a form manufactured by a man. The chief thing about Allen Ginsberg as a poet is that he always shows you his form emerging, the way it builds up, a thing created out of ordinary speech but suddenly, by the height of its emotion, transcending ordinary speech. Kaddish begins with words you or I might speak:

Strange now to think of you, gone without corsets &
eyes, while I walk on the sunny pavement of Greenwich Village

Like most modern poetry, this cannot be broken down into a traditional meter, but has to be considered in terms of Pound’s Second Law of Imagism: “to write in the sequence of the musical phrase.” There are three phrases above, the second syncopating slightly with the first, and the third a prolonged complication on both of the first two. It’s rather like Charlie Parker taking off and searching for his theme. In a few lines Ginsberg finds his basic beat:

… and I’ve been up all night, talking, talking,
reading the Kaddish aloud, listening to Ray Charles blues shout blind on the phonograph
the rhythm the rhythm

We are still in the area of normal American speech, but Ginsberg is beginning to pick out of it his own building blocks. “And I’ve been up all night, talking, talking” … “Ray Charles blues shout blind on the phonograph/the rhythm the rhythm:” these lines syncopate beautifully, and the internal phrase, “reading the Kaddish aloud” picks up on the initial “Strange now to think of you.” Allen Ginsberg sifts through the resources of American English like a placer miner going through his dust, carefully lifting out a nugget at a time.

Once he has found what he’s looking for, he hammers it out with the remorseless monotony of Beethoven, or perhaps I should say of Bizet in the Arlesienne Suite. Kaddish moves towards its close through a hymn to the God who allowed the poet’s mother to go mad:

Even the tragedy of the poor old woman is blessed:

But an even stronger rhythm breaks in to mourn the all-too-true truth that there is nothing blessed, only pain, in the story of Naomi Ginsberg:

and the reality, the lack of blessing and triumph, is thereupon hammered like Pound’s rock-drill till it almost bursts the reader’s brain:

The theme beats into the soul like a drum:

—and then suddenly turns around on itself and bursts forth into a line of sheer genius:

with your Death full of flowers

From “Strange now to think” through “the rhythm the rhythm” the poem has gradually created, just through the integrity of its own emotion, the justification from the drum-beat and thunder of “only to have, only to have” and “with her eyes, with her eyes.” If anybody else repeated the “formula,” it would only be a trick, because the emotion is in the words and the discovery of the words is the discovery of the emotion. It is Ginsberg’s personal Golgotha that we meet here, and if you or I were to tell our own stories we would have to find our own words and emotions. That is why a great work of poetry is always so original as to seem “formless” at first glance. It appears to have no form because it is a new form, manufactured in heart’s agony, a shape cut in the air as a sculptor cuts.

The last movement open with a bird call:

The crows seem to burst onto the page with the vividness of real life; we actually hear them before we see them. But Ginsberg, with the audacity of genius, has another trick for us in the next line:

The tom-tom is back again, this time in a half-rhymed fugue with “Caw caw caw” chasing “Lord Lord Lord” down the page. It is “only to have” and “with your eyes” picked up into greater urgency than before:

The ending is pure fugue, pure as Bach:

The harsh monosyllables of American speech have dominated the poem from “Strange now to think” right through to “caw caw caw Lord.” Pound showed us bow to do this forty years ago, with his “Blue jade cups well set” etc., but he has had no student to apply him half so well as Allen Ginsberg. And the economy and magnificence of using “Lord Lord Lord” against “caw caw caw”—an implied identification picked up in the montage-like shift from God as “black cloud” to the black cloud of crows—this is balancing a poem as skillfully as Roebling balanced the Brooklyn Bridge.

Among the shorter poems in this volumes particularly good are “Poem Rocket,” “Death to Van Gogh’s Ear,” “The Lion for Real,” and “Ignu.” “Poem Rocket” contains a line that evokes extra-terrestrial beauty better than the best of the science-fiction writers: “Which way will the sunflower turn surrounded by million of suns?” And “The Lion for Real” brings the Spirits of Terror to the page in a way that makes one think of Dante; you can’t laugh off Ginsberg’s Lion anymore than you can smile at Dante’s hell, or Blake’s Tyger, or Melville’s Whale. Ginsberg has seen the Lion, and, by God, he makes you see it, too. Naturally, Life magazine describes his vision as “sick” and “warped”; the System which is willing to create twenty thousand abnormal babies everytime it sets off a nuclear bomb cannot afford to listen to the reports of this extremely delicate instrument, the “Defense Early Warning Radar System” that, is the soul of the poet today. 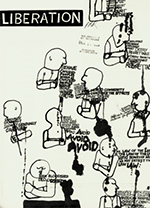 The Poet as Radar System
by Robert Anton Wilson appeared in Liberation, Volume 7, Issue 9 in November 1962.