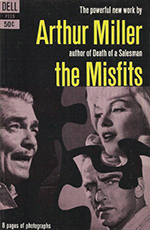 Some people think Arthur Miller has been declining since Death of a Salesman; I am more inclined to think that he has been improving. Salesman, when you look at it with the hip anti-abstractionism of my generation, is just a New Deal speech dramatized: old Franklin Delano’s radio crooning put on the stage. It’s not really a tragedy, nor even a drama, but just a soap-box oration. It doesn’t have that shocking newness of perception which is the hallmark of great art. It says what we could say ourselves before seeing it, all the cliches of the 1930s and the uptown Liberal mind.

A View from the Bridge, on the other hand, was something better, something new and disturbing. Not a study in unconscious incest, as most critics thought it was, but a study in how repressed love becomes rage. It contains discoveries that are alarming and disturbing even to readers of Reich and Norman Mailer. The Misfits, I am happy to say, is even better.

The conflict in this novel-cum-movie is between three men and a girl. The men are „misfits,“ hipsters of the Old West, the last American individualists. They make out by rodeo-riding for prizes, by hunting wild mustangs and by other self-directed employments. „Working for wages“ is the chief horror of their lives: they know that it is the modern form of slavery and they want none of it.

Then the girl enters their lives. She is, as one of the men remarks, „tuned in on the whole works,“ and he is referring to the stars when he says this. She has Ling, sensibility: she digs things. The conflict comes when she tries to persuade the men not to sell some mustangs they have caught. The mustangs are to be sold to a company which slaughters them for dog food; this practice has decimated the mustang population and shows signs of leading to the eventual extinction of the species. These beautiful animals will soon disappear from the face of the earth, at the behest of that profit-system which sober men assure us is rational and wise. But if our heroes stop hunting mustangs, there is little else left for them: eventually they must give up their individuality, go to work for wages, and become slaves of the system themselves. Out of this conflict Miller weaves a strange and disturbing work of art: not quite a tragedy, but a story that is sad and haunting like a good folk ballad, and likely to linger in one’s memory as long as the stories of John Henry and Joe Hill. 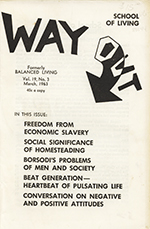 The Misfits
reviewed by Robert Anton Wilson appeared in Way Out, Volume 19, Issue 3 in March 1963.