If there is one proposition which currently wins the assent of nearly everybody it is that we need more jobs. “A cure for unemployment” is promised, or earnestly sought, by every Heavy Thinker from Jimmy Carter to the Communist Party-USA, from Ronald Reagan to the head of the economics department at the local university, from the Birchers to the New Left.

I would like to challenge that idea. I don’t think there is, or ever again can be, a cure for unemployment. I propose that unemployment is not a disease, but the natural, healthy functioning of an advanced technological society.

The inevitable direction of any technology, and of any rational species such as Homo Sap., is toward what Buckmister Fuller calls ephemeralization, or doing-more-with-less. For instance, a modern computer does more (handles more bits of information) with less hardware than the proto-computers of the late ’40s and ’50s. One worker with a modern teletype machine does more in a hour than a thousand medieval monks painstakingly copying scrolls for a century. Atomic fission does more with a cubic centimeter of matter than all the engineers of the 19th Century could do with a million tons, and fusion does even more.

This tendency toward ephemeralization or doing-more-with-less is based on two principle factors, viz:

1. The increment-of-association, a term coined by engineer C.H. Douglas, meaning simply that when we combine our efforts we can do more than the sum of what each of us could do separately. Five people acting synergetically together can lift a small modern car, but if each of the five tries separately, the car will not budget. As society evolved from tiny bands, to larger tribes, to federations of tribes, to city-states, to nations, to multi-national alliances, the increment-of-association increased exponentially. A stone age hunting band could not build the Parthenon; a Renaissance city-state could not put Neil Armstrong on the moon. When the increment-of-association increases, through larger social units, doing-more-with-less becomes increasingly possible.

2. Knowledge itself is inherently self-augmenting. Every discovery “suggests” further discoveries; every innovation provokes further innovations. This can be seen, concretely, in the records of
the U.S. Patent Office, where you will find more patents granted every year than were granted the year before, in a rising curve that seems to be headed toward infinity. If inventor A can make a Whatsit out of 20 moving parts, inventor B will come along and build a Whatsit of 10 moving parts, inventor C of 5 moving parts. If the technology of 1900 can get 100 ergs out of a Whatchamacallum, the technology of 1950 can get 1000 ergs, 2000 can get 100,000 ergs. Again, the tendency is always toward doing-more-with-less.

(I cannot spend more space on this point here. Those who want more evidence of the doing-more-with-less phenomenon should consult Fuller’s Operating Manual for Spaceship Earth and Alfred Korzybski’s Manhood of Humanity. I move on.)

Aristotle said that slavery could only be abolished when machines were built that could operate themselves. Working for wages, the modern equivalent of slavery very accurately called “wage slavery” by social critics is in the process of being abolished by just such self-programming machines. In fact, Norbert Weiner, one of the creators of cybernetics, foresaw this as early as 1947 and warned that we would have massive unemployment once the computer revolution really got moving.

It is arguable, and I for one would argue, that the only reason Weiner’s prediction has not totally been realized yet although we do have ever-increasing unemployment is that the big unions, the corporations and government have all tacitly agreed to slow down the pace of cybernation, to drag their feet and run the economy with brakes on. This is because they all, still, regard unemployment as a “disease” and cannot imagine a „cure“ for the nearly total unemployment that full cybernation will create.

Suppose, for a moment, we challenge this Calvinistic mind-set. Let us regard wage-work as most people do, in fact, regard it as a curse, a drag, a nuisance, a barrier that stands between us and what we really want to do. In that case, your job is the dis-ease, and unemployment is the cure. 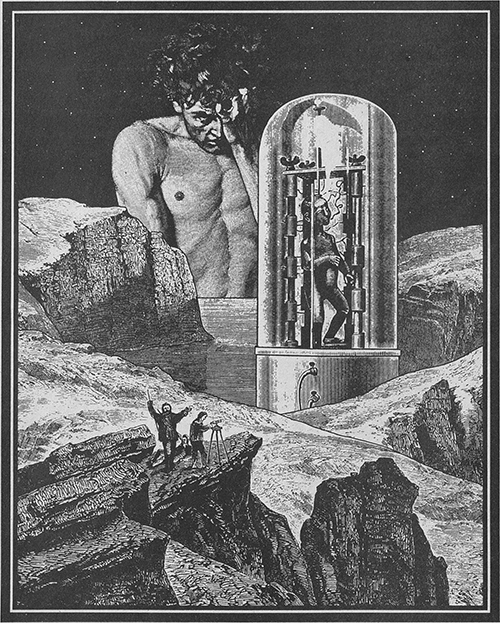 “But without working for wages we’ll all starve to death!?! Won’t we?”

Not at all. Many farseeing social thinkers have suggested intelligent and plausible plans for adapting to a society of rising unemployment. For instance:

1. The National Dividend. This was invented by engineer C.H. Douglas and has been revived with some modifications by poet Ezra Pound and designer Buckminster Fuller. The basic idea (although Douglas, Pound and Fuller differ on details) is that every citizen should be declared a share-holder in the nation, and should receive dividends on the Gross National Product for the year. Estimates differ as to how much this would be for each citizen, but at the current level of the GNP it is conservative to say that a share would be worth several times as much, per year, as a Welfare recipient receives—at least five times more.

Critics complain that this would be inflationary. Supporters of the National Dividend reply that it would only be inflationary if the dividends distributed were more than the GNP; and they are proposing only to issue dividends equal to the GNP.

2. The Guaranteed Annual Income. This has been urged by economist Robert Theobold and others. The government would simply establish an income level above the poverty line and guarantee that no citizen would receive less; if your wages fall below that level, or you have no wages, the government makes up the difference.

This plan would definitely cost the government less than the present Welfare system, with all its bureaucratic red-tape and redundancy: a point worth considering for those conservatives who are always complaining about the high cost of Welfare. It would also spare the recipients from the humiliation, degradation and dehumanization built into the present Welfare system: a point for liberals to consider. A system that is less expensive than Welfare and also less debasing to the poor, it seems to me, should not be objectionable to anybody but hard-core sadists.

3. The Negative Income Tax. This was devised by Nobel economist Milton Friedman and is a less radical variation on the above ideas. The Negative Income Tax would establish a minimum income for every citizen; anyone whose income fell below that level would receive the amount necessary to bring them up to that standard. Friedman, who is sometimes called a conservative but prefers to title himself a libertarian, points out that this would cost “the government” (i.e., the taxpayers) less than the present Welfare system, like Theobold’s Guaranteed Annual Income. It would also dispense with the last tinge of humiliation associated with government “charity,” since when you’d cash a check from IRS nobody (not even your banker) would know if it was supplementary income due to poverty or a refund due to overpayment of last year’s taxes.

4. The R.I.C.H. Economy. This was devised by inventor L. Wayne Benner (co-author with Timothy Leary of Terra II) in collaboration with the present author. It’s a four-stage program to retool society for the cybernetic and space-age future we are rapidly entering. R.I.C.H. means Rising Income through Cybernetic Homeostasis.

Stage I is to recognize that cybernation and massive unemployment are inevitable and to encourage them. This can be done by offering a $100,000 reward to any worker who can design a machine that will replace him or her, and all others doing the same work. In other words, instead of being dragged into the cybernetic age kicking and screaming, we should charge ahead bravely, regarding the Toilless Society as the Utopian goal humanity has always sought.

Stage II is to establish either the Negative Income Tax or the Guaranteed Annual Wage, so that the massive unemployment caused by Stage I will not throw hordes of people into the degradation of the present Welfare system.

Stage III is to gradually, experimentally, raise the Guaranteed Annual Income to the level of the National Dividend suggested by Douglas, Bucky Fuller and Ezra Pound … which would give every citizen the approximate living standard of the comfortable middle-class. The reason for doing this gradually is to pacify those conservative economists who claim that the National Dividend is “inflationary” or would practically wreck the banking business by lowering the interest rate to near-zero. It is our claim that this would not happen as long as the total dividends distributed to the populace equaled the Gross National Product. But since this is a revolutionary and controversial idea it would be prudent, we allow, to approach it in slow steps, raising the minimum income perhaps 5% per year for the first ten years. And, after the massive cybernation caused by Stage I has produced a glut of consumer goods, experimentally raise it further and faster toward the level of a true National Dividend.

Stage IV is a massive investment hi adult education for two reasons. (1) People can only spend so much time fucking, smoking dope and watching TV; after a while they get bored. This is the main psychological objection to the workless society, and the answer to it is to educate people for functions more cerebral than fucking, smoking dope, watching TV or the idiot jobs most are currently toiling at. (2) There are vast challenges and opportunities confronting us hi the next three or four decades, of which the most notable are those highlighted in Tim Leary’s SMI²LE slogan—Space Migration, Intelligence Increase, Life Extension. Humanity is about to enter an entirely new evolutionary relationship to space, time and consciousness. We will no longer be limited to one planet, to a brief less-than-a-century lifespan and to the stereotyped and robotic mental processes by which most people currently govern their lives. Everybody deserves the chance, if they want it, to participate in the evolutionary leap to what Leary calls “more space, more time and more intelligence to enjoy space and time.”

What I am proposing, in brief, is that the Work Ethic (find a Master to employ you for wages, or live in squalid poverty) is obsolete. A Work Esthetic will have to arise to replace this old Stone-Age syndrome of the slave, the peasant, the serf, the prole, the wage-worker—the human labor-machine who is not fully a person but, as Marx said, “a tool, an automaton.” Delivered from the role of things and robots, people will learn to become fully-developed persons, in the sense of the Human Potential movement. They will not seek work out of economic necessity, but out of psychological necessity as an outlet for their creative potential.

(“Creative potential” is not a panchreston. It refers to the inborn drive to play, to tinker, to explore and to experiment, shown by every child before his or her mental processes are stunted by authoritarian education and operant-conditioned wage-robotry.)

As Bucky Fuller says, the first thought of people, once they are delivered from wage-slavery, will be, “What was it that I was so interested in as a youth, before I was told I had to earn a living?” The answer to that question, coming from millions and then billions of persons liberated from mechanical toil, will make the Renaissance look like a tempest in a teapot.

The End of the Work Ethic
by Robert Anton Wilson appeared in City Miner, Volume 3, Issue 4 (1978)