The Case Against Voting:
An Insult To Your Integrity

If voting could change the basic politico-economic system of this country, it would be illegal.
(Common Zen savvy assures us, after all, that anything that can possibly change the system is illegal, right?)

Voting is not only legal but is actually encouraged and praised by the public school system and the oligopolistic media. This indicates perfectly how harmless (and pointless) it is. If voting threatened the ruling elite, the penalty for doing it would be equivalent to owning a Tommy gun (life imprisonment.) The right to bear arms — guaranteed in the Second Amendment — has been taken away exactly because it is a real danger to the Establishment; voting has not been taken away because it is not a real threat, or even a serious nuisance.

It doesn’t matter what gang of clowns holds political office; the real rulers go right on the way they always have.

Grok, and grok in its fullness: if voting Able instead of Baker into office was a major harassment to Standard Oil, say, not even a menace, but just a bother — then, gloriosky, Zero, teaching it in school would be a morals offense. The propaganda against it (from nice old Miss Bland in first grade and sincere Eddie Albert on TV, right up to “thoughtful” articles by official “liberals” in New
York think-sheets) would be as monolithic and hysterical as the anti-LSD campaign.

If pulling the lever wasn’t condemned by “all recognized authorities” as a cause of blindness or at least chromosome damage, it would most certainly be denounced as “escapist” or “neurotic.” We do understand that much about Establishment semantics, don’t we?

Second. Voting is, willynilly, an endorsement of the system. It is a conspiracy to deny liberty. When you enter that booth and pull down that lever, you not only give another human mammal the authority to govern over you and coerce you, but you also give him/her the same authority over your neighbors, who may not want to be governed or coerced.

Whether you give such authority to Dick Nixon or Gloria Steinem or to our local shaman, Jesus Christ Satan, Crown Prince of Arcadia, doesn’t matter. You never had such authority yourself in the first place, and you therefore have no right to delegate it to an agent or representative.

Two people who are going down a long country road with a third, do not have the right to do with him as they please, whatever comes into their heads, just because they are a statistical majority. The minority, even the minority of one, retains all its inalienable human rights whatever combination it enters. The situation does hot change with the figures adjusted to 2,000 and 1,000, or even to two billion and one billion. Any voluntary agreement is morally permissible.

Government — the imposition of involuntary servitude — is never legitimate, whether imposed by a single autocrat, a parliament, or a democratic majority assembled in solemn conclave to declare war, organize a lynching, or whatever else it pleases.

Third. Voting implicitly legitimizes the institution of coercion (the State) and all its disiderata of terror, murder, brutality, deception, fraud, robbery and aggravated fakery. Voting contributes to the pretence that there is something voluntary about the most involuntary institution on the planet.

Voting would only measure real public opinion if the ballot included a square for “no government” to be marked by those who choose not to be serfs of any of the opportunists on the list of candidates. It is notorious even now that more people refuse to vote (i.e. implicitly vote “nogovernment”) than vote for any of the candidates. Nixon, for instance, received he vote of only about 23% of the population in his “landslide victory.” More people wanted NEITHER Nix nor McGovern, than wanted EITHER Nix or McGovern.

Fourth. Voting for politicians (public entertainers) is a deliberate snare and delusion, to distract us from the real power in this moribund system. When was the last time you were given the opportunity to choose a president for PG&E, our local energy-hog? Yet that guy will effect your bread-and-butter survival, and your glands and nerves, more than the broken-down Model T-Ford in the White House.

Dig: they let you choose between such inspiring duos as Nixon-Humphrey or Reagan-Wallace to encourage you to forget that you have no say over who will make the decisions at Standard Oil or GM, or Bank of America. If political democracy were to mean something in the 20th Century, the whole people would elect the whole governing group, who would then be responsible to act for the welfare of all. A system in which the most powerful officials of all, the corporation sultans, are not EVEN IN THEORY elected by or responsible to the people, is not democracy by any stretch of semantics, but just the continuation of feudalism by other means.

Five. You know and I know and by now the tree on the corner knows, that nobody can make the present system work — not even Jesus Christ and all 13 apostles working 16 hour shifts with Buckminister Fuller acting as logistic advisor. Our ruling class, however, much we like to curse it out, is not the worst in history; compared to Attila the Hun or Ghengis Khan, the Kissingers and Rockefellers are quite nice, clean, liberal, sweet-smelling, educated, etc. (This is largely due to low cunning and a product called soap, but let that pass.) The only reason they sometimes act like Attila or Ghengis is that they become a little funny-in-the-head from trying to manage a system that no longer can be managed.

They are trying to run a horse-and-buggy 18th Century government and a piratical 15th Century economy which exists only in their own hallucinations, while around them (invisible to their vision) is the physical technology to abolish hunger, eliminate toil, create abundance for all, achieve immortality and blastoff for the stars.

The whole system of wages, bosses, patriarchy, male supremacy, monogamy, etc. is out of date. The ethics, economics, psychology and philosophy is all out of date. We are being governed by McLuhan’s “Year-view mirror experts” who know nothing about where we’re going and everything about where we’ve been. The only sane course is to drop out of the system and start creating the new system in the oases and deserts where the State isn’t watching, “building the new society within the shell of the old” as the Syndicalists say.

As Yeats sang:
A statesman is an easy man
He tells his lies by rote
So stay at home and drink your beer
And let the neighbors vote.

Or, in Bokonon’s memorable words “Ceasar has no idea what’s really happening.” 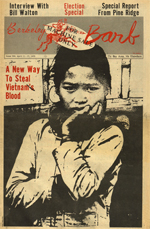 The Case Against Voting: An Insult To Your Integrity
by Robert Anton Wilson appeared in the Berkeley Barb, Issue 504 in April 1975.