Neither of them looks dangerous. At forty-two, they’re both a bit portly. Robert Shea, about six feet, is modishly attired like a successful magazine editor—which he is, at Playboy. Robert Anton Wilson, some inches shorter and with a slight Vandyke, resembles nothing so much as an arcane medieval scholar without his robes. He is the author of Sex and Drugs: A Journey Beyond Limits, Playboy’s Book of Forbidden Words, The Book of the Breast (all Playboy Press), The Sex Magicians (Jaundice Press), and the forth-coming Prometheus Rising: A Magick Manual for the Space Age. He’s an initiated witch in the New Reformed Orthodox Order of the Golden Dawn, and a voodoo priest in the Socicdad Magico de Chango. They look fine to invite home to dinner, but they’ve just unleashed a holy terror on the world, intended to rend the fabric of reality as it is generally perceived. 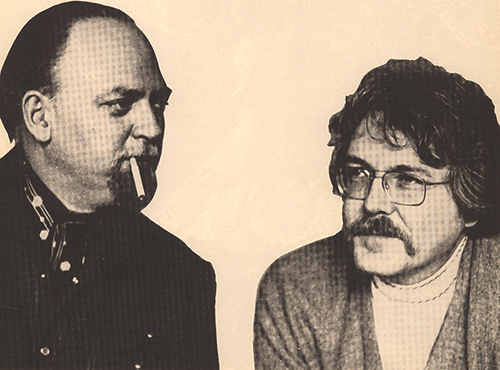 Their Illuminatus! trilogy* is the first fiction ever written from the point of view of quantum physics—that branch of science that allows for parallel universes, time-travel, and other such heretofore “mystical” and socially unacceptable phenomena. Because of the book’s relationship to new trends in science, Dr. Timothy Leary has called Illuminatus! “more important than Ulysses or Finnegans Wake.”
Part I: The Eye in the Pyramid, Part II: The Golden Apple, Part III: Leviathan; Dell, paper, $1.50 each.

The Bavarian Illuminati (Ancient Illuminated Seers of Bavaria) are a quasi-organization with a documented history going back at least 200 years and probably much farther—perhaps to the days of Atlantis. (You can read up on the short version in the Britannica.) Everyone from the John Birch Society to underground Communist blocs has written inter- and intra-office memos, faithfully reproduced in the trilogy, portraying the Illuminati as the Enemy; many people seriously believe that the Illuminati are manipulating the course of world history to their own ends.

Illuminatus! begins with the premise that all insane paranoid visions of conspiracy are true, and that the Bavarian Illuminati have been conspiring under various names and guises since before the dawn of history. The novel’s basic plot involves or describes the quest of a group of characters who search for, attempt to uncover and to thwart the Illuminati’s nefarious designs.

Illuminatus! is written from twenty-three different points of view—including those of squirrels, dolphins, gorillas, computers, and other higher intelligences—interweaving the occult, para-psychology, magic, shamanism, and other spooky things through five basic plotlines. It deals with the destruction of Atlantis, the collapse of California, the assassination of John F. Kennedy, the secret history of the Third Reich, the French Revolution, oriental mysticism, the 1968 Democratic convention, the Mafia, and the psychedelic counterculture. Adolf Hitler, John Dillinger, George Washington, Linda Lovelace, and the fifteenth-century Portuguese explorer Fernando Poo make appearances. This is a science-fiction detective thriller spanning the millennia from the 1980s to Atlantis and back again to the fateful date of May 1, 1976, at which time there is reason to believe the Illuminati will attempt to Immanentize the Eschaton—i.e., bring about the end of the world. Illuminatus! has a nice Aristotelian beginning, middle, and end, and is funny enough to give to one’s mother.

When Shea and Wilson were editing the Playboy Forum together in 1969, they got “a hell of a lot” of letters from people talking about illegal conspiratorial activities in the federal government. Some of these letters were sane and well-documented enough that they appeared in the Forum, and on occasion the Playboy Foundation or the ACLU got action on certain cases. Shea and Wilson used to discuss the other, more paranoid, letters after work, and they started playing a game together: supposing all the charges in those letters were true; suppose the government is doing all those dreadful things. 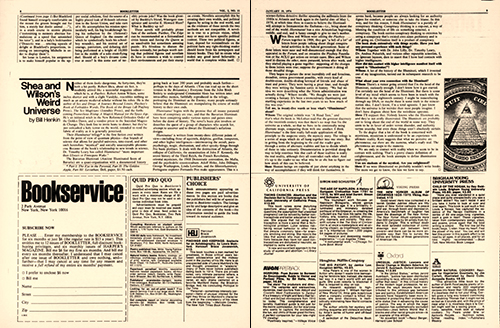 They began to picture the most incredibly evil and ferocious, decadent, rotten government possible, with every kind of double-cross, double-dealing betrayal of friends and abuse of trust and power. They were having a great time, and thought they were writing the funniest satire in history. “We had no idea we were describing what the Nixon administration was actually doing.” Wilson recalls. “We thought we were just creating a fantasy. It’s been a tremendously illuminating and startling experience in the last two years to see how much of this was true.”

Henkin:Tell me, in twenty-five words or less: what’s “Illuminatus!” about?
Wilson: The original subtitle was “A Head Test,” and that’s what the book is. McLuhan said that the greatest discovery of the twentieth century was that there’s no map that fits the universe as a whole, so that we have to be continually using alternate maps, comparing them with one another. I think Illuminatus! is the first really full-scale application of this principle to the suspense story, the mystery story. The trilogy is a series of maps which do all hang together into one story. But in getting from the beginning to the end the reader goes through a series of alternate realities and has to decide which of these to take seriously. Documentation is provided along the way to help convince him that each of these realities is really the real reality, although they all contradict each other. And it’s up to the reader to use what wits he or she has to figure out how much of this can be believed.
Shea: Human beings are capable of just about anything in the way of accomplishment if they will think for themselves. It seems hard, because people are always looking for an authority figure for comfort, or someone else to take the blame. In this way, and for this reason, I think Illuminatus! is a parody of conspiracy thinking. Conspiracy thinking is a cop-out, a way of blaming the condition of life on something external, a conspiracy. The book carries conspiracy thinking to extremes by using a conspiracy that’s existed ever since prehistory and is still going on. Civilization itself is a product of conspiracy.

Henkin:The book deals extensively with things mystic. Have you had any personal experience with such things?
Wilson: Together with Dr. John Lilly, Dr. Timothy Leary, Dr. Andrea Puharich, and various other reputable scientists, I, an ignorant layman, dare to assert that I have had contacts with higher intelligences.

Henkin:How did this contact with higher intelligence manifest itself with regard to “Illuminatus!”?
Wilson: A lot of the history of the Illuminati, which I invented out of my imagination, turned out in subsequent research to be true.

Henkin:What about your own connection with the Illuminati?
Wilson: There’s a rumor going around that I’m the head of the Illuminati, curiously enough. I don’t know how it got started. I’m certainly not the head of the Illuminati. But there is some level of my mind which seems to have been in touch with the Illuminati in the eighteenth century. I might be remembering through my DNA; or maybe there is some truth in the reincarnation idea. I don’t know, I’m a total agnostic. I just know that the universe is far weirder than most people imagine. I don’t have dogmas about how the weirdness operates.
Shea: I’ll support that. Nobody knows who the Illuminati are, and they’re not really illuminated. The Illuminati are probably out to bring about the end of the world in some way. They seem to be in favor of order versus disorder, and authority versus anarchy, but even those things aren’t absolutely certain. To the degree that a lot of the book is concerned with mysticism, mysticism is understood to be an experience with ultimate reality. Kant suggests that what we perceive are phenomena; out there are the numena, what’s really real. The phenomena are maps to the numena. We are only in contact with reality when we seem to be in contact with nothing. That’s a pretty classic definition of enlightenment, and the book attempts to define illumination implicitly.

Henkin:You are students of the mystical. Are you enlightened?
Shea: If we were illuminated we probably wouldn’t write books. The more we get to know, the less we have to say. 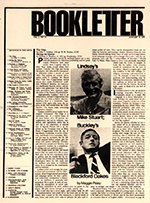 Shea and Wilson’s Weird Universe
by Bill Henkin appeared in Bookletter, Vol. 2, No. 11, in January 1976