It is dangerous to fight in the dark. Without light, you might mistake your allies for your enemies, or vice versa. You might also spend most of your time swinging at empty air.
— Mordecai the Foul, Bavarian Illuminati High Priest

The Z Budapest case has little in common with the Matthew Manning case described in part one of this series, except that Z is another victim of the inarticulate and undeclared occult warfare of our time.

Z Budapest is a witch, who was trained in her occult powers by the secret teaching methods of the ancient sisterhood of witches. Matthew Manning developed his powers accidentally and unintentionally.

Z Budapest is being persecuted because the State of California ostensibly does not believe in her powers. Matthew Manning is being harassed because the English Ministry of Defense believes all too well in his powers and doesn’t want him wandering around wielding such PSI-energy without government control.

This is the paradox of psychic politics. If the government doesn’t believe in the individual psychic’s talents, they are likely to persecute her/him as a fraud, under the bunco laws — which has happened to Z Budapest. If the government does believe in an individual’s PSI, however, they are likely to persecute him/her as a possible danger to their military secrets or even to their military hardware. After all, a Manning — or a Geller — who can bend metal in a laboratory, might also be able to trigger, by occult power, the firing, or the misfiring, of a nuclear headed rocket.

The second paradox of psychic politics is that the Adepts of old, in order to guard against the misuse of these powers, have arranged that they are taught through a series of initiations and secret societies. These are to weed-out any students who are on an ego trip, a power trip, a sadism trip, etc. The result of this secretive policy, however, is that every occult society is regarded, by some non-members, as a diabolical conspiracy which is hiding itself only because it is, like our secretive governments, on a gigantic ego trip, power trip and sadism trip.

Those who are not occultists quickly develop this “situational paranoia” whenever they brush up against the occult world.

The Z Budapest case is archetypal.

Allegedly, Ms. Budapest-has been arrested, tried and on April 15 of this year, convicted for fraud — i.e. for fortune telling. Actually, Z is not being punished for fortune telling (Tarot divination) anymore that Dr. Timothy Leary is being punished for possession of a fraction of an ounce of a herb now virtually legal throughout the state. In the politics of PSI, when you arrive in the court room, everything relevant is declared irrelevant and everything material is declared immaterial, just as in other political trials.

Z Budapest is being punished for being a witch (High Priestess of the Susan B. Anthony Coven), an “uppity woman,” a Feminist and a religious heretic. The anti-fortune telling laws have been overturned in over 30 California cities already and are clearly on their way out. They are only enforced occasionally — that is, against “trouble makers.” If these laws were enforced across the board, all the astrology columnists in all the newspapers in this state and a high percentage of the more shamanistic “Revivalists” in the Christian churches, would have been arrested along with Z.

For that matter, most of the Taoist priests in our Oriental communities would have been busted, too, since they virtually all practice divination, with or without the “Hippie’s Bible” (I Ching.)

The exercise of PSI powers only be comes criminal when practiced by a feared minority, such as witches or gypsies.

The atheist gadfly, Madalyn Murray O’Hair, has been warning us for over a decade that the ecumenical spirit of tolerance between those previously hostile mega-cults, the Catholics, the Protestants and the Jews, does not bode well for civil liberties. Court records bear her out. As long as the Big Three were mutually antagonistic, the first amendment was fairly secure; each was paranoid about the other two. In the last generation, since cozy ecumenicism has replaced this paranoia, persecutions of real minorities has steadily escalated. The Big Three have gotten their act together and will tolerate no dissent from the tapioca-like Liberal-Judeo-Christian synthesis they’ve formed.

Thus, while Z Budapest’s case is under appeal, we see: an atheist (Carry De Young) fighting to be reinstated in his job in Minnesota; Tim Leary among the missing; a male witch (Robert Williams) driven to suicide by loss of job and other harrassments, in Missouri; the chaplain of the California State Senate under fire from bigots because he happens, to be a Buddhist; other psychedelic religionists in jail like Leary (Don Chapdelaine, in Connecticut) or lying low underground (where is the Church of Psychedelic Venus these days?) Anxieties that seem to come right out of the Dark Ages — e.g. a distinguished physicist meets me at an occult convention and begs me not to mention in print that he was there!

In this context of the new Ecumenical Bigotry, a secondary trend can easily be missed. I mean, of course, the possibility that “war” (the government’s own word) against those who seek mystic and occult consciousness with forbidden chemicals can escalate into “war” against those seeking such New Consciousness by any means whatever.

In essence, then, Dr. Leary’s famous “Two Commandments for the Neurological Age” transcend (as he intended them to transcend) the narrow issue of psychedelics per se. These Commandments, if you’ve forgotten, say: “Thou shalt not alter thy neighbor’s consciousness without her or his consent” and “Thou shalt not prevent thy neighbor from altering her or his own consciousness.”

In the murky area of the occult, it is hard for even the ACLU to see how this quintessential libertarianism applies. But the menace of government monopoly on occult power grows each year and this can become even more repressive than government’s present monopoly on firearms and explosives.

Occultists, psychedelicsists and parapsychologists are all, in the Illuminati phrase, “fighting in the dark,” and swinging wildly at phantoms a lot of the time. Governments, in their mixture of superstitious dread, hard-nosed skepticism and desire to monopolize any real knowledge or power in these fields, is also swinging in the dark.

And we are headed for a collision with Future Shock. A growing number of Futurists are willing to predict that, just as biology is already launched on research that will change human life more fundamentally than anything in history (immortality is among the prospects seriously discussed) parapsychology and paraphysics is about to change our whole definition of reality.

Think of’Edison and his tiny filament glowing for a few moments on the first trial run and what came out of that. Then think of Uri Geller bending a key by thinking of bending it and what may come out of that.

Z Budapest is accepted as a real witch and a real psychic by witches I know up and down the California coast. She is no bunco artist.

The Z Budapest case is not a matter of interest only to other Feminists, or other witches. Like the Leary case and the Matthew Manning case, this is one of the crucial civil liberties issues of our decade, since it raises the most important question emerging from psychic research.

The question who will control the psionic energies? The secret societies of the past? The increasingly totalitarian governments of the present? Or each individual according to her/his own level of psychic development?

The battle cry of the next decade may be (science-fictionish as this sounds) “Psionic power to the people!” 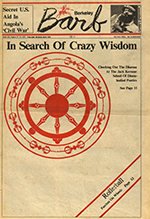