Sex is profoundly distasteful to a being of my mineral origin.
“Mr. Bradley Mr. Martin” in William S. Burroughs‘ The Ticket that Exploded

Cardinal Spellman, as we all know, is somewhat mis-named—the real cardinal is a rather peaceful bird; it might be more fitting if the Vatican gave him a special title, more appropriate to his disposition, such as Hawk Spellman.

Even the faithful of his own church are beginning to grumble somewhat against The Hawk. When he defended the napalm roast in Viet Nam last June, quoting Decatur’s “May my country ever be right, but right or wrong—my country,” the Catholic publication Commonweal (for June 17, 1966) was moved to a gasp of dismay, saying:

“Catholics today are appalled by the flagrant nationalism in the statements of Military Bishop Rarkowski during the Nazi period. But what are we to make of the statements of our own military bishop who seems to have gone beyond these extremes? At least Bishop Rarkowski (thought) Hitler’s wars were just wars. Cardinal Spellman, however, has reportedly embraced decatur’s dictum that right or wrong the nation’s cause is to be supported.”

The Hawk, actually, in his excess of patriotism, is guilty of grave heresy and, technically, could be excommunicated. This is not very likely to happen, however; the Vatican, very quick to excommunicate for liberal heresy, is notoriously laggard in reprimanding those guilty of reactionary heresy.

The Hawk is much more interesting as a case history than as a villian, however. Let me compare him for a moment with his eminent cohort, The Vulture (Fultie Sheen.) One of The Vulture’s favorite jokes-he hauls it out whenever he goes off into one of his periodic tantrums against modern child-rearing theory—is a shtick that goes like this: “What every child needs is a pat on the back—especially if it is administered hard enough, often enough and low enough.“ You can’t understand The Hawk’s feelings about Viet Nam until you understand, fully, The Vulture’s feelings about the buttocks of little children. All existent pacifist propaganda misfires and fizzles because it misses this point.

Let me jump several steps of argument (I will fill them in later) and say right here that child-torture is THE DISEASE of our civilization. The Cherokee Indian word for “white man” translates as “He -who-beats-his-children.” Sado-masochism is not a perversion, not a “way of life” (to paraphrase our friends at Mattachine), not a deviation. It is the shape of our civilization, as the god-dance is the shape of a Sophocles tragedy, as tensor calculus (seemingly) is the shape of the universe.

The CNVA and other sentimentalists think that if they walk down Fifth Avenue with posters showing a weeping Vietnamese infant with napalm burns they will provoke opposition to the war. They have not, and they will not. They provoke a pornographic excitement. Always. In every case. Even among themselves.

One of Freud’s greatest essays is “A Child Is Being Beaten” (Collected Papers, Vol. II). Every pacifist should read this ten times before he tries again to discourage war by showing pictures of suffering children. Everybody who wonders why corporal punishment continues in Catholic schools, when all public schools have abandoned it, should read it ten times, too. Freud’s subject is the dream, or fantasy, “a child is being beaten,” reported over and over again by the sexually disturbed:

“The fantasy has feelings of pleasure attached to it,” (Freud writes.) “At the climax of the imaginary situation there is almost invariably an onanistic gratification …”

Semmelweiss discovered that doctors with dirty hands were killing their patients; doctors learned to wash their hands. Freud began to discover seventy years ago how our civilization with its shape of Authority-and-Submission, Punishment-and-Obedience, was killing its own soul. For forty years, Neill has demonstrated at Summerhill what education should be. He has proven—more conclusively than Ohm proved his electrical law or Einstein proved relativity—that our present-day schools, like doctors before Semmelweiss, are operating with dirty hands, Catholic schools especially, and murdering the mind of the child … For forty years Neill has been ignored. For forty unnecessary years the butchery has continued. Vietnam is just a magnification of the basic sado-masochism of our whole culture.

William Burroughs has called capital punishment “the orgasm death gimmick,” and wasn’t it Gulliver who knew he was back in a “Christian Country” when he caught sight of a gallows in the distance? We are all wrong to think of Judea-Christianity as anti-sexual, and Reich or Lawrence or our own favorite prophet as pro-sexual. There is no anti-sexuality anywhere, ever; there are just various forms of sexuality, and the sado-masochistic form, symbolized by the Cross, is the kind of sexuality which gives The Hawk an erection. The orgasm death gimmick is the form of sexuality that predominates in our culture. Dig the dismay of gallows cultists when the abolition of capital punishment is discussed. Sexual intolerance is the most fervid variety of intolerance. A crusading zeal comes over a man as soon as he finds the kind of ejaculation that suits him best. The faggots will never tire of trying to convert the rest of us. The monogamous repeat, like a litany, that promiscuity is “immature.” The promiscous, on principle, want to drag every monogamous person into adultery. The necrophiles, undoubtedly, are profoundly convinced that the rest of us are guilty of very invasive behavior, for tampering with living beings in an intimate way. The same is true of The Hawk. When he howls against Jane Russel’s breasts or Connie Chatterley’s games with Mellors, and then raises a cheer for the baby-roast in the Mekong Delta, he is just acting like all the rest of us squares, insisting that his way of coming off is the best way. The Hawk carries the public with him only because his way is the best way for the vast majority of people raised in the torment of The Civilization of the Cross.

And there, my friends, is the explanation of The Hawk, and of his fellow hawks in the Pentagon. Bet money on it. 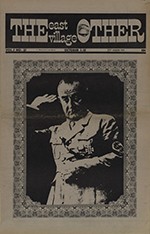