Your footnote to my article “Objections to Objectivism” (May issue) is technically and logically correct. My attempt to state the objection to the “is” of identity was defective and richly deserved this correction.

However, the editor also misses the point. Sentences like “Smith is a liar” are not understood logically to mean Smith is a word, not even by Ayn Rand, as the editor noted; but there is some evidence (not a little evidence, but quite a bit of it, in the works of Korzybski, Whorf, Sapir, Frobenius, Rapoport and others) that the entire neuro-semantic apparatus of the human organism does respond to such sentences, if not checked by systematic counter-conditioning and and semantic re-education, by behaving in a way very similar to that of logically following the conclusion that Smith out there (the man) is totally identical in all respects with the neurally-manufactured Smith in here, the verbal concept.

This seems to be as automatic as the similar process by which a fan made up of separate blades rapidly turns into a solid disc when the power is turned on, and continues to appear as a solid disc no matter how often we remind ourselves that it is really separate blades. Similarly, the Western world has known since Galileo (and the Eastern since Buddha) that the green of grass is in our brains, not in the grass, but we continue to see it “in” the grass.

Methods of transcending the first kind of delusion (identification of words with things) are to be found in General Semantics. Methods of transcending the other two (identification of images with things) are found in Zen Buddhism, Sufism, and Hermetic Magick. Lacking such systematic re-education, the average person lives in a dream-world of words and mind concepts, a film between himself and reality, which continues to appear as being reality no matter how much optics or neurology one abstractly “understands”, and which is only recognized as the dream it is when one systematically undergoes training with a skilled practitioner of one of the non-verbal arts mentioned above, or gets very, very deep into the foundations of mathematics.

On a different subject, I would appreciate a few inches of space to respond to your attack on Ben Tucker in the June Match!.

The complaint that Tucker is a “mish-mash of contradictions” would be dismissed as a rhetorical exaggeration, I am mire, by any panel of logicians. Some philosophers change their position every time they write a new piece, such as Nietzsche and Plato; some maintain the smile position throughout their life, with only minor alterations, such as Aquinas and J.S. Mill. I’m quite sure that any mathematical breakdown of key ideas graphed against years dedicated to defending said ideas would show Tucker much, much closer to the latter group than to the former. However, I don’t see what this proves; as Emerson noted, consistency is often the hobgoblin of small minds, and I find more inspiration and provocation in changeable writers like Nietzsche than in monoliths like Aquinas.

The objection to Tucker’s style is purely subjective. I, personally, regard him as one of the major stylists in American prose history, but that is also subjective. I do think, however, that Tucker’s refusal to use easy emotional rhetoric and his attempt to demonstrate each proposition with logical argument is rather valuable, since few political thinkers of any school have made a similar effort toward the method of mathematics and the precise sciences.

The rejection of Tucker’s position on the first World War is entirely justified. But how much does it prove? Gene Debs took a wiser and more “anarchist” position on that war, and went to jail for it, a reason why I will always love and respect Debs; but, again, any mathematical breakdown of key ideas would show that Tucker’s formulations were more anarchistic more of the time than Debs‘ positions. Thus, on the war, I agree with Debs, not Tucker; on a majority of other issues I agree with Tucker, not Debs. I don’t see the logic of condemning Tucker because of one writing that I don’t agree with. I think that everybody I admire in recent ideological history (Fuller, Pound, Leary, Picasso, Joyce, to name a few) have all taken wrong positions at times, but I don’t see the “therefore” which leads logically from this to the conclusion that we should reject their right positions.

The charge that Tucker claimed children should “belong to” their parents is, I think, somewhat inaccurate and not perfectly justified. Tucker actually said that children should belong to their mothers until old enough to belong to themselves. I hardly find Tucker’s position here satisfactory, but I know of no better one. The traditional European position that they belong to their fathers, the socialist position that they belong to the State, and the general Anarchist position that they belong to the community, are all equally unsatisfactory; the general Anarchist position, perhaps, is the worst of all, because “father”, “mother”, and even the “State” at least refer to persons or groups that, in each case, have front names, hind names, and addresses, whereas the community is, as Stirner would say, a spook—a footless abstraction. I suspect that the editor has never had any children, or he would realize how truly helpless newborn infants, toddlers and young children are for several years. Any good book on pediatrics or anthropology will convince him that no human infant can survive without some person or group taking responsibility for that survival. (This responsibility is, operationally, the meaning of Tucker’s “belong to” phrase.) I don’t yet have any clear ideas about who should have that responsibility, but Tucker’s answer is at least clear-cut and definite, besides having a lot of biological-psychological common sense behind it. I will only consider the editor’s criticism to be really damaging when he comes up with an equally precise answer identifying some person or group findable in specific space-time, and not some abstraction like “the community.”

The objection to Tucker’s position on voluntary defense associations also fails to convince me. I certainly agree (as did Tucker) that most of the crime we now experience will fade away in a free Anarchist society, but I cannot share the editor’s jump from most to all crime. Let me give an example. Glen Helen, in Yellow Springs, happens to have a serious rape problem. The women of Antioch College have formed a defense association and patrol the Glen for themselves. I cannot fathom the kind of libertarianism which denies this simple human right, the right to security against violence. Anarchism is not a suicide pact; liberty is not masochism. If our editor’s principles drive him to oppose this, let me ask how far he will carry these principles—i.e., can two women walk together for protection, or is even that too much organization for him to tolerate? Even Stirner admitted the desirability of a Union of Egotists; does the editor want a Robinson Crusoe society?

Finally, Tucker’s prediction that State Socialism will probably occur before Anarchism happens to have been correct; most of the world now has some form of State Socialism, and Anarchism is still an ideal to be fought for. That Tucker thought State Socialism was an inevitable stage before Anarchy is simply not true; he devoted most of his best writing to countering that pernicious notion. He simply observed, in old age, that things were not going the way that seemed right and rational to him, and I for one admire the simple integrity which enabled him to see what was really happening in the world instead of what he wished was happening.

I observe that, in answer to Mark Sullivan’s emotional defense of Tucker, our editor responded with an emotional counter-attack. I hope that, in answer to this attempt at a rational defense of Tucker, our editor will respond with a rational counter-attack. Further light can only be the result in that case, and as Tucker himself once said, in any debate the real victor is the one who gains new light. 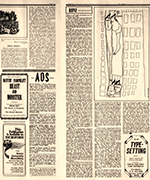 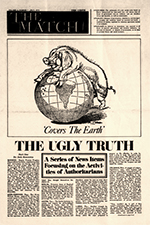 Mr. Wilson Disagrees
a letter to the Editor from Robert Anton Wilson appeared in The Match!, Volume 4, Number 7 in July 1973.