Puritanism: the haunting fear that somebody, somewhere, might be having a good time.
— H.L. Mencken

I took a walk on Shattuck Avenue today and found a large percentage of the newspaper vending machines had been vandalized. Each vandalized machine had its window painted over so I couldn’t see what was for sale, but over the paint was a sticker informing me that the publication inside was “a crime against women.” I couldn’t judge that for myself; the vandals had decided for me, by making the publications invisible. When I got home, I heard on the TV that Larry Flynt had been shot. Neither of these crimes particularly surprised me, since I’ve noticed a wave of morality sweeping the country in the last few years.

Americans, like other primitives, seem to be subject to attacks of moralistic crusading about as often as they go to war about once every twenty years. The two phenomena are very similar, ethologically considered.

Both war and morality require an “enemy” to be attacked. Both allow, and even encourage, a suspension of the rules of simple courtesy and common decency that allow society to function in a fairly sane manner in normal times. In both war and morality, attacking the “enemy” is regarded as a duty; anybody who points out the sadistic joy in these search-and-destroy missions is regarded as a cynic or a dirty-minded Freudian.

Of course, to make the war or the moral crusade seem even more necessary, it is never admitted that the war-makers or moralists are attacking the “enemy.” It is claimed, rather, that the “enemy” is attacking them. The rhetoric of the Vietnamese rumble insisted that the Viet Cong were likely to land on the beaches of California any day if we didn’t bomb them back to the Stone Age; Anita Bryant’s crusade is allegedly not against homosexuals but in defense of children it is even called “Save Our Children.”

In fact, morality, like war, is only seemingly goal-oriented; the ostensible goal (punishing the “enemy”) is a cortical rationalization. The real purpose is glandular, homeostatic: letting off steam, purging personal rage, grief, resentment, self-pity, guilt, etc. in a kind of bachanal de Sade. It’s the sociological equivalent of a child’s temper tantrum, an adult’s paranoid psychoses.

Fortunately, the present recrudescense of morality takes a variety of contradictory forms, since we are living in a mercifully pluralistic society. Thus, to travel around These States today is equivalent to a crash course in cultural anthropology. In previous times you had to travel from one country to another to appreciate what anthropologists call cultural relativism—the fact that what is “moral” in one place is “taboo” in another. Nowadays, you can learn this without leaving the United States. 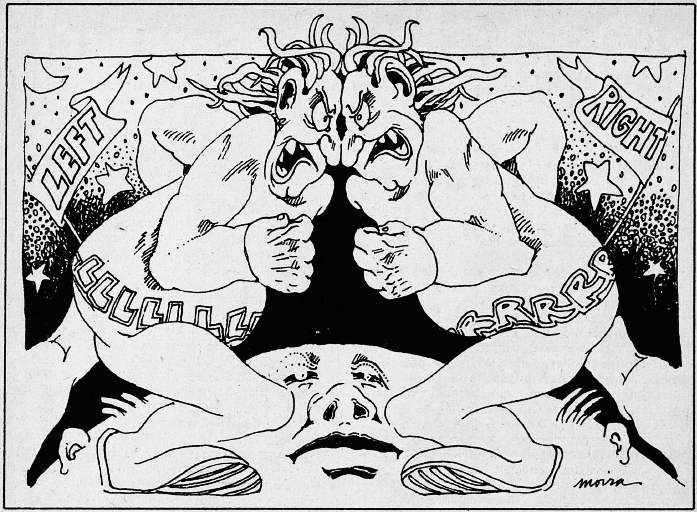 For instance, the greater Bay Area is probably the Cannabis capital of the nation; you can’t go to a party, or in Berkeley even walk down the street, without being offered a joint. At the same time, tobacco smokers are harassed here with growing intensity. Go to the Midwest and you will find these taboos reversed: you can smoke tobacco anywhere but a single roach can land you in the can. Of course, the moralists in both cases feel equally righteous; moralists always feel righteous.

On a more subtle level of taboo and fetishism, when I arrived in the Bay Area in 1972, I quickly learned that opening doors for women is a major violation of tribal mores here. Since one must be tactful about such matters on primitive planets, I adjusted carefully to the local taboo system; in fact, I adjusted too well. On a visit to Houston in 1975, I absent-mindedly continued allowing women to open doors for themselves, until a few cutting remarks indicated that the older taboo-system was still in force there. I learned to open doors for women again, until I came back here.

All of this is instructive from an evolutionary point of view, as illustrating the propensity of domesticated primates to imprint any and every morality if it happens to be the official system of their culture or subculture.

Of course, every human society has some system of criminal law. Such laws should be rational and obviously necessary: their function is, as Sophocles said, to protect the citizen from force and fraud. This is absolutely all that a rational mind wants, or will voluntarily accept, in restrictions on personal freedom. My right to swing my fist ends where your nose begins.

This common-sense, mind-your-own-business theory of law has never been satisfactory to moralists, all of whom are determined to ram their private taboo system down everybody else’s throat. This is because moralists, like psychotics, do not think objectively, but subjectively; they don’t even know what objectivity means. For instance, read any rightwing blast at Larry Flynt and then read the attack on him in Mother Jones for February-March 1978. The same subjective smog, the same inability to see or observe without prejudice, appears in both the paleo-puritanical right and the neo-puritanical left. The moralist cannot perceive anything but his/her own emotions; facts register indirectly, as emotional storms in the glandular system.

The notorious hypocrisy of moralists, noted by every satirist from Juvenal to Ambrose Bierce and Terry Southern, is the result of this subjectivism. The fornicating clergyman is totally sincere, because totally subjective: only his emotions are real to him. The Berkeley Barb, which lives off advertisements for whorehouses, is equally sincere in denouncing everybody else’s “sins.” This is typical of primate consciousness and can be found among chimpanzees, gorillas and monkeys as well as humans. In the socio-biological sense, it holds the primate band together, however comical it may be to an objective observer.

As a libertarian, I, must have written 100,000 words in various places urging people to get off one another’s backs, mind their own business, and become libertarians like me. The result of all this earnest rhetoric was, of course, exactly zilch. DNA has programmed domesticated primates to play these morality games with each other; it comes from the cellular and glandular levels, and reason has no effect on it.

The rational person can only grin and bear it. At least these days, due to anthropology and ethology, one does not have to take it too seriously. You can be sure that whatever lifestyle you follow, some gang of moralists will hate you for it. On the other hand, if you were to change your lifestyle entirely, so that the moralists who now condemn you would embrace you as a convert, some other gang of moralists would hate you for your new orientation. When you fully understand that every choice you make, every day of your life, creates the same double-bind—some will hate you for going one way, others for going the other way you can, with confidence, do what you want, and tell all the moralists to go piss up a rope. 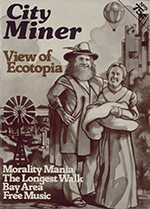