Money and Drugs: Drugs and Money

Piss wars … George Bush, the then President Elect of the United States, volunteered to be one of the first Americans to take a urine test for drugs. That was back when he was only Vice President. I guess he wanted to set a good example in totalitarianism for the rest of the country. During the Iran-Contra investigations, however, Bush refused to take a lie detector test. It appears Bush doesn’t want to know whether he’s telling the truth or lying, but he wants us to be sure he’s not stoned while he’s doing it.

Neither Kafka nor Orwell, in their wildest satires on totalitarianism, imagined a government prying into the bladders of its citizens for evidence of Mindcrime.

Neurologically, Piss Wars opens awesome possibilities. The most widely used urine test in the U.S. detects traces of marijuana and cocaine but does not detect L.S.D. The corporate structure of the short-term future will therefore evolutionarily thin out the pot-smokers and coke-freaks while Acid Heads climb merrily upward in the hierarchy. This would seem to mean the sensuality and detachment of grass and the wired aggression of coke will dwindle in Power Centers but the Morophogenetic/Futuristic Evolutionary visions of L.S.D. will play a larger and larger role in shaping policy.

Think about it when you try to imagine the year 2000.

One Ton A Day? … On the other hand, a friend in Silicon Gulch (the San Jose-Santa Cruz area of California) recently told me there is a ton of grass smoked every day in that high tech enclave — where most of the software of Star Wars is being produced. I couldn’t believe it at first, but he worked it out on his computer and showed me. The population is 4 million. Assuming that only half of them smoke the weed and that they only smoke one joint a day — very conservative estimates, I think — one comes out with a ton of weed, and a heavy fog of cannabis vapour circulating “in the belly of the beast” (As radicals like to say.)

Most of the companies in the Gulch are unwilling to institute Piss Wars. They know that if they did, they’d lose their most talented and hard-working software experts immediately.

The modern “barbarians” — the Cyberpunks — are not only within the gates but within the Citadel itself.

Holy Wars … A-Albionic Research (626 Flowerdale, Ferndale, M.I. 48220) is a publisher of books and pamphlets dedicated to demonstrating the proposition that (in their own words and capitals) “The British Empire is the Central Phenomenon of World History Since the Decline of the Vatican.” None of their literature is totally whacky; they simply argue, with heavy documentation, that the U.S. and U.S.S.R. only seem to be major powers and the Brits are still running everything behind the scenes — with the Vatican (offstage) clandestinely plotting to get back the power it has lost to Anglo-Saxondom in the last four centuries.

None of their books and pamphlets are stupid and there are only occasional clearcut lapses into “twisting the facts to suit the theory” here and there in their works.

Just Fly Low … The biggest banking scandal of the past decade was the collapse of the World Finance Corporation in Miami, when its officers were indicted by the Dade County District Attorney for knowingly engaging in laundering cocaine money for various Latin American governments. According to both Penny Lernoux’s In Banks We Trust and Jonathan Kwitney’s Endless Enimies, eight of the executives of the World Finance Corporation had direct links with the C.I.A. and the District Attorney himself called a press conference to declare, with his bare face hanging out, that the C.I.A. was deliberately blocking his investigation. Nevertheless, the president of the W.F.C. and several other officials were indicted and convicted, and evidence was uncovered that the C.I.A. had been using the bank to transfer money for “deep cover” covert operations in Latin America.

Only those dumb enough to vote for Maggie Thatcher will believe that the C.I.A. was using the bank for covert Operations without knowing it was also a cocaine laundromat.

It appears that while Nancy Reagan was telling youngsters to “Just Say No,” the C.I.A. was telling its buddies, “Just Fly Low.”

The President of the W.F.C. was Guillermo Cataya, veteran of the C.I.A.’s “Bay of Pigs” team. The money laundering chain begun by the W.F.C. moved the funds to the Cisalpine Bank in the Bahamas, owned by Archbishop Paul Marcinkus, Manager of the Vatican Bank, and Roberto Calvi, President of Banco Ambrosiano, found hanging from a bridge in London on June 18, 1982.

Deforestation … According to Popular Mechanics for February 1938, a new Invention would soon make it possible to end the cutting of trees to produce paper for our books, offices and newspapers. Popular Mechanics was so enthusiastic about this Invention that they predicted farmers would earn billions of dollars a year making paper this way and would never cut down another tree.

As you look around at our devastated forest lands, you might ask yourself what the hell happened in the past 50 years. Where did the wonderful invention go?

Well, kiddies, the wonderful Invention was a device that made it possible to harvest hemp more cheaply than ever before. Hemp was the chief ingredient in paper throughout most of history (the U.S. Declaration of Independence was written on it, for instance) and paper made of hemp lasted a good long time compared to paper made of wood pulp. (Ever notice how 19th or 18th Century books or even 17th Century books like the original folio of Shakespeare’s plays, printed on hemp, are still around, while modern books printed on wood pulp fall apart in only decades?)

Our books continue to rot away quickly, and our forests continue to be destroyed, because the U.S. government declared war on hemp. They had found out that some people smoke it and get happy.

Definition … Puritanism, according to H. L. Mencken, is “the haunting fear that somebody, somewhere, might be having a good time.”

Mysteries of Masonry … When Roberto Calvi was found hanging from that bridge in London he was wanted in Italy for stock and currency fraud in connection with his Banco Ambrosiano. Curiously, the day Calvi died, the secretary was defenestrated — fell, or jumped, or was pushed from a window of the Banco in Milan. Even more curiously, Calvi was found with bricks stuffed in his pockets and was hanging where the rising tide had covered his dead body.

In the 32° of Masonry, it ls explained to the candidate that the function of the Free and Accepted Craft of Freemasonry is to frustrate the efforts of the Knights of Malta, who are described as agents of “tyranny and superstition.” (My source for this bit of information cannot, of course, be revealed.)

S.M.O.M. … the “Knights of Malta” are correctly known as the Sovereign Military Order of Malta, usually abbreviated S.M.O.M. Their headquarters is in Vatican City, and they are Catholic laypersons devoted to advancing the interests of Catholicism. According to British journalist Gordon Thomas (in his Year of Armageddon) the members of S.M.O.M. currently act as couriers between the Pope and the C.I.A.

In Italy lately the most prominent Knights of Malta have been Licio Gelli, head of the P2 conspiracy, who has been charged with setting up the cocaine laundering business for Calvi and Archbishop Marcinkus, organizing terrorist bombings and plotting a fascist coup; Michele Sindona, who was president of the Franklin National Bank, was convicted of 65 counts of stock and currency fraud in New York, was extradited to Italy and convicted of murdering a bank examiner there, and died of poison in his cell while awaiting trial on charges that he and Gelli and Calvi had plotted terrorist bombings; and, of course, Roberto Calvi himself, the man hanging from the bridge in a manner well calculated to cast suspicion on Freemasons. (Source: Covert Action Information Bulletin #25.)

Maybe A-Albionics is on the right track. Maybe the Brits have taken over and P2 is a Vatican attempt to regain what they have lost in the past five centuries.

On the other hand, according to both David Yallop’s In God’s Name and Penny Lernoux’s In Banks We Trust, Licio Gelli, who organized the Vatican cocaine loop, was employed by the C.I.A. from the mid-1950s on.

Penn Square … In Gelli’s P2 conspiracy, banks were being used to launder drug money and finance right-wing Catholic dictatorships. In the Penn Square case, we find something curiously different.

The Penn Square Bank of Oklahoma went belly-up after granting a mysterious series of unsecured loans to various individuals and corporations. The matter eventually cost shrewd old Chase Manhattan a pretty penny — forty-six million dollars according to Lernoux, In Banks We Trust — because Chase had, for unknown reasons, guaranteed Penn’s unsecured loans.

Was the tough, pragmatic Chase Manhattan just careless when they guaranteed these unsecured loans, or did they have a motive that profane folk outside the Money Elite cannot understand?

The Vice President in charge of loans at Penn Square, William G. Patterson, was in the habit of wearing Mickey Mouse ears in the office. They were the kind that wiggle when the wearer pulls a hidden string inside his jacket, and Patterson liked to wiggle them while discussing loans, a sight which surely might have disconcerted some customers.

Patterson also attended a meeting of Seattle First National Bank, once, dressed as an Arab shiek, which raised eyebrows.

Lernoux concluded (in her In Banks We Trust) that the drug-money laundering trail involves banks all over the world. I conclude that some of the bankers have been sampling the merchandise. 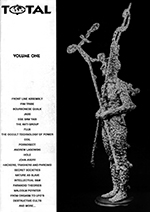 Money and Drugs: Drugs and Money
by Robert Anton Wilson appeared in TOTAL, Volume One in Spring 1991.