Junky is Back — Pure and Uncut 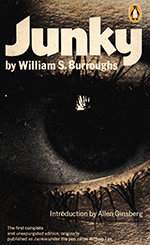 In 1957, looking at 100 pages of an unpublished book by William S. Burroughs called Naked Lunch, I said, “This man is the greatest prose stylist since James Joyce.” I believe that my opinions on every other subject in the galaxy have changed in the two decades since I made that judgement, but my opinion of Bill Burroughs hasn’t changed. This man is still the greatest prose stylist since James Joyce. Junky is Burroughs‘ first novel, originally published in a castrated edition by Ace Books in 1952, under the pen-name “William Lee.”

A few others who have reached my advanced years may remember that botched first edition, which will always rank as one of the major aberrations of the mad New York publishing world. The cretins at Ace first cut the balls of Burroughs‘ adamantine prose, deleting brilliant sentences and whole paragraphs or pages to suit their mediocre ideas of “good taste.” That is normal treatment for a new writer and is probably a remnant of some paleolithic initiation rite, like having “Kick this boob in the ass” taped to the back of your shirt after arriving at a new school.

Ace went far beyond that level of initiatory horseplay. They actually inserted editorial comments, not as footnotes but right in the middle of the text, saying Burroughs was a liar and a psychopath every time he reported something contradictory to the official mythology of the U.S. Narcotics Bureau. Then they paid him an $800 advance, which was mean and anal-retentive even by the price-structure of 1952.

Now, at last, we have an edition of Junky exactly as Burroughs wrote it, uncensored and uninterrupted by dissenting editorials. It is, like all of Burroughs‘ books, a masterpiece of brilliantly accurate, objective and subjective reporting on the functioning of the human nervous system in extreme conditions. The emphasis, of course, is on the neurochemical compulsion of addiction itself and on the social role of the Junky as scapegoat-lower-than-all-other-scapegoats, the ultimate shit-on in Calvinist society.

The charm of the narrative, as always, is Burroughs‘ total lack of self-pity or self-justification, his mordantly incisive detachment which gazes straight into the lowest pit of Hell and describes precisely what it sees there.

A rather pompous author — I think it was myself, actually — once said that a book without the element of heroism is a crime against the young and impressionable. Junky, however excruciating the details it records, is never without that element of heroism, although it is subliminal and located mostly within the style — that marvelous early-Burroughs prose, modeled on the objectively ironic dead-pan technique of the two masters of realistic detective fiction, Dashiell Hammett and Raymond Chandler. 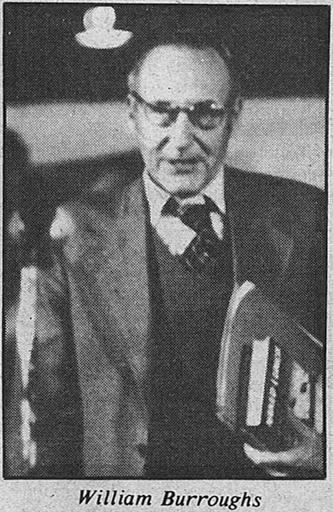 As a junky, Burroughs spent 15 years living out the role of low man on the American totem pole. As a genius, he has been able to transcend all the suffering that entailed and describe it in sentences so simple and yet so devastating that by comparison not only Hammett and Chandler but even Hemingway and O’Hara look insensitive. Here’s a typical paragraph:

“The Fag was a brilliantly successful lush-worker. His scores were fabulous. He was the man who gets to a lush first, never the man who arrives on the scene when the lush is lying there with his pockets inside out. A sleeping lush — known as a flop in the trade attracts a hierarchy of scavengers.

“First come the top lush-workers like the Fag, guided by a special radar. They only want cash, good rings, and watches. Then come the punks who will steal anything. They take the hat, shoes, and belt. Finally, brazen, clumsy thieves will try to pull the lush’s overcoat or jacket off him.”

This looks like good journalism, on the surface, but it will repay the kind of close textual analysis that academic critics give to Joyce or Pound. The deliberate use of underworld language and slang — “lush-worker,” “flop,” “punks” etc. — places the narrator inside the subject; he is no clinical observer, but one who speaks from the center of the experience.

At the same time, the. mock-heroic (almost Homeric) tone — the Fag’s scores were “fabulous,” he was the man who gets the lush first, he towers above his competitors who are only “punks” or “brazen, clumsy thieves” — is subliminally implicating the reader in the criminal’s grandiose self-image. One simple but perfectly accurate phrase, unobtrusively nestled in the center of the heroic chronicle, neatly deflates the whole process to what it actually is: “a hierarchy of scavengers.”

Joyce once said that there are only two kinds of public statues. One is looking down thoughtfully, and Joyce claimed he was trying to say, “How did I get up here?” The other is holding his hand out, palm down, and Joyce says he is telling us, “The dung-hill was this high in my time.”

Burroughs‘ humor follows the same principle as that Joycean epiphany. Henry James called such intricacies “the turn of the screw,” but Burroughs has a better metaphor when he speaks of his work as a “naked lunchroom,” where everybody is forced to contemplate unblinkingly exactly what is on the end of every fork and how it got there.

Flaubert said of the War of 1870, “If the fools had read my Bovery, this sort of thing wouldn’t happen.” He meant, I suppose, that wars are made by people without any sense or irony or detachment. The War on Drugs which has raged through this nation in the last two decades may be, ultimately, more damaging to the country’s morale and civil liberties than the nightmare in Vietnam was.

One can certainly say, with more justification than Flaubert had for his hyperbole, if the fools had read Burroughs‘ Junky, this sort of thing wouldn’t happen.

‘Junky’ is Back — Pure and Uncut
by Robert Anton Wilson appeared in Berkeley Barb, Issue 606 in March 1977.