Although little appreciated by the general public, the Elizabethan poet John Donne (1571-1631) is regarded by many scholars, literary critics and fellow poets as one of the greatest writers in our language; some have even compared him favorably with his great contemporary, Shakespeare.

Donne’s poetry is best categorized as “witty” in the 17th Century sense, which is a bit more complex than our modern idea of wit as pointed humor. Elizabethan wit was not only comic but metaphysical; the aim was to say two things—or if possible three things or four or even more—under the guise of only saying one. Students of the occult will not need to be told that this technique has been the usual practise of high initiates throughout history; but Donne, who is the outstanding example of this manner in all literature (before James Joyce) is not generally believed to have had any occult interests.

Is it possible that behind Donne’s many shifting meanings there is an occult theme? No writer on Donne that I have read has ever suggested this; he is generally thought to have been a rakish young man who wrote sensual and sometimes bawdy poems and then suddenly turned pious with the onset of middle age, entered the Anglican Catholic priesthood and turned to mystical verse in the orthodox Christian manner.

At no point does Donne appear to have explored the occult or unorthodox varieties of mysticism.

Yet this conventional view of John Donne runs into trouble in trying to explain certain of his poems, especially the long sonnet sequence entitled “Metempsychosis,” which combines a Pythagorean doctrine of reincarnation with a variety of wend notions which cannot be traced to any known teaching, orthodox or heretical. More mysterious yet, this long poem was written in 1601, before the turn to piety had otherwise manifested itself and while he was still writing decidedly libertine love-poetry.

Recently, browsing through my volume of Donne, I re-read what is usually considered the most “chaste” of his romantic poems, “The Ecstasy,” probably written around 1598 and thus strangely contemporary with such “bawdy” or “cynical” poems as his “To His Mistress Gong to Bed,” “Go and Catch a Falling Star,” etc. Unlike these other verses, which are frankly and bluntly erotic (“License my roving hands and let them go/Behind, before, above, between, below” is one of the less inflamatory couplets from “To His Mistress Going to Bed”), “The Ecstasy” seems to describe a purely mental or “Platonic” love, and this is the way it is interpreted by every critic I have read.

I happened to glance up from the page, while reading “The Ecstasy” this time, and my eye fell upon a Tibetan print which hangs on my wall: a portrait of a Tantric monk and the lady who embodies his yidam (personal goddess) engaged in ritual copulation in the double-lotus yabyum position, i.e., sitting in each other’s laps, so to speak. It suddenly struck me that Donne’s tricky language could be describing this very ritual.

Consider: the accepted idea that Donne and his lady in this poem are engaged in something completely sexless is triggered, in most readers, by the fourth line—“Sat we two, one another’s best.” The image that forms in the average mind is that they sat side by side; I suggest that they sat in the Tantric yabyum coital position. Is this possible?

“And pictures in our eyes to get/Was all our propagation,” Donne goes on, sounding quite innocent. Note that staring into each other’s eyes during ritual coitus is part of some schools of Tantra, however; note also that the Tantric yoga can be used, and has been used (as in the Oneida Colony in New York State, 1840-1872) as a method of birth control. Is Donne, like Aleister Crowley in certain similar poems, saying one thing on the surface and something else for those who have eyes to see?

Later on Donne has two lines which seem like a direct warning against taking the superficial “Platonic” reading of this poem: “Love’s mysteries in souls do grow/But yet the body is his book.” It is hard to see why these lines were included, if the ecstasy described were only mental in a dualistic sense.

Were such Tantric practices known to any Englishmen of Donne’s time? The answer to this pivotal question is not “possibly” or even “probably” but “definitely.” I cite two pieces of evidence out of many:

1. Giordano Bruno, whose De vineulis in genere concerns “magical linking, particularly links through love or sexual attraction” (Francis Yates; Giordano Bruno and the Hermetic Tradition, Vintage, 1964, p. 347) was in England, at Oxford, in 1585. There Bruno published a volume of love-poetry which bears all the ear marks of being a coded manual of similar sex-magick (Yates, p. 275-290); Yates believes Bruno may also have founded the free-masonic order there which did not “surface” until nearly a generation later. Donne attended Oxford 1584-87 and could hardly have missed meeting, or at least hearing about, the great Italian heretic and his “pagan” notions. (Bruno’s continuing influence on the Elizabethans is indicated by the character of Berowne in Shakespeare’s Love’s Labour’s Lost, whom many scholars have taken as a portrait of Bruno himself.)

2. The English alchemist Thomas Vaughin (1621-1659), whose life overlaps Donne’s by some ten years, was most certainly aware of sexual magick, as every reader of The Works of Thomas Vaughan, edited by Arthur Edward Waite (University Books, 1968) will certainly agree. More: Vaughan was familiar with the traditional Tantric form of these rites. Numerous passages could be quoted in support of this; I give one brief but fairly explicit reference: “The proportion and regimen of (the Work) is very scrupulous, but the best rule to know it by is that of the Synod: ‘Let not the bird fly before the fowler.’ Make it sit while you give fire … In a word, without this bath nothing in the world is generated … Our Matter is a most delicate substance and tender, like the animal sperm, for it is almost a living thing. Nay, in truth, it bath some small portion of life, for Nature doth produce some animals out of it.” (pages 220-221.) For the rest, they can best decipher Vaughan who consult the traditional Ordo Templi Orientis code for alchemical writings given in Louis T. Culling’s Manual of Sex Magick (Llewellyn, 1972.)

To review: Donne’s poetry, all scholars agree, constantly uses double and triple meanings; this is a traditional method of high initiates; “The Ecstasy” can be read either as a “Platonic” union or as a Tantric sex-yoga union; the examples of Bruno and Vaughan show that some such ideas were available to at least some educated Englishmen of that time.

I think it is interesting to note, in passing, that Donne indicates a possible awareness of the sexual code of alchemy in his poem “Love’s Alchemy,” which includes the couplet “And as no chemic yet the elixir got/But glorifies his pregnant pot.”

We are certainly not in the vicinity of proof positive here, but I believe that my thesis has been shown to be plausible and not at all absurd. I am at work on a long book concerning the hidden history of sex magick and further data will be given there, about Donne and about his great contemporaries, Shakespeare and Marlowe; I also hope to show that Eleanor of Acquitaine probably had more to do with importing this Oriental tradition to the West than did the more notorious DeMolay of the Knights Templar. At the very least, I can now demonstrate that there is no truth at all in the ultra-skeptical view of some historians of the occult who hold that Margaret Murray and/or Aleister Crowley and/or Karl Kellner “invented” a history of Western Tantrism out of whole cloth at the beginning of the present century. And I think the witch-hunt mania of the late Middle Ages and Rennaisance was quite likely a struggle with a faith rival to Christianity and strong enough to incite real panic in the defenders of orthodoxy. The current “psychedelic genocide”—a phrase coined by Michael Aldrich, Ph.D. for the government’s war on the young—is only the latest in a long battle against “witches” and “alchemists” whose potions and cauldrons contained a medicine the orthodox could not understand, and could only explain away as a tool of the devil. 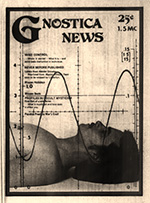