How would a free society deal with its psychopaths?

Mr. Tefler’s question in your issue of June 2 deserves a careful answer, and I would like to make my own attempt to provide such a reply.

What can an anarchistic society do about psychopathic (i.e., motiveless) criminals? To begin with—and this is not begging the question—we must be very clear that contemporary society can do nothing about such persons. Capital punishment has no deterrent effect upon them; if anything, it has a provocative effect: for every one it kills, it drives two more to go “over the line” and unleash their violence more furiously. When the State sheds blood in the presence of sharks, it does not frighten them but merely activates their appetites. Furthermore, prison is not much more helpful. The enforced sodomy of such places leads to more violence, and the psychopath comes out more furiously blood-blinded than he went in. Psychiatry (in the present society) is no more useful: the psychopath is intelligent enough to know, as the hipster knows, that psychiatry has become the ally of the State and is, thus, part of the conspiracy against which he is in insurrection. Robert Lindner, of Baltimore, had more success with psychopaths than any other psychiatrist, but only because he was himself a rebel who denounced orthodox psychiatry for its allegiance with authoritarian conformity.

Now, in considering the psychopath in an anarchistic society, we are committing a semantic and logical error if we do not, first of all, ask would he be produced there? We can manipulate the abstractions “individual” and “society” in our heads in all sorts of fictitious ways, but in actuality the two form a gestalt which cannot be taken apart so easily. As an example, you can think of “homosexual” and of “Trobriand Island society” and put the two thoughts together, but in actuality the STRUCTURE of Trobriand society was such that a homosexual could not, in fact, be produced within it—not until the missionaries came. (Malinowski quotes a native as saying, homosexuality and venereal disease were brought by the missionaries. Sexual Life of Savages, page 473). It was only after the social STRUCTURE had been altered by Christianity that homosexuality was able to fit into Trobriand life. Similarly, the Zuni Indians have never had a murder, and cannot understand the very concept of suicide. These acts do not fit the characterological structure of Zuni society, (See Ruth Benedict’s Patterns of Culture).

Another example might make the point even clearer. Until Grantly Dick-Read, childbirth was painful in Occidental culture, whereas in many African tribes it is not painful. This instance demonstrates fully that the “individual” cannot be separated from the “society”: he thinks, acts and feels within a spectrum of possibilities defined by the society. Even when he is “maladjusted” or “rebellious”, his behavior fits society’s definition of “maladjustment” and “rebellion”. An article in the Scientific American a few years ago demonstrated that schizophrenic Irishmen have one type of delusions, schizophrenic Italians have a different type.

So, now, are we justified in importing the psychopath into anarchistic society and worrying about what that society will do about him? The psychopath is a product of authoritarian culture. His background shows the typical pattern of violent beatings from an authoritarian father, juvenile punishment, internalization of this parental and societal behavior in terms of the philosophy that “might is right”, and the final crystallization of a personality determined to be the “mightiest“ of all by being the most brutal of all. In short, the molding of the psychopathic personality is dependent upon a previous context of authoritarian-coercive society. A libertarian-voluntary society would not mold personalities of this type.

How will anarchism handle psychopaths? The same way the Zuni handle Suicides, the Trobrianders handle homosexuals, and Summerhill handles bullies. It will not produce them. 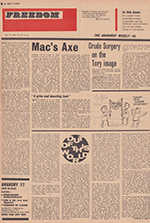 How would a free society deal with its psychopaths?
a letter from by Robert Anton Wilson appeared in Freedom, Volume 23, Issue 23 in July 1962.