Hefner vs. The Narcs

I never knew Bobbie Arnstein very well when I worked for Playboy, but everything I knew about her was good.

Bobbie was the one that you talked to “in the Mansion” if you felt an injustice was being done. Nine times out of ten she would fix it up.

Bobbie was the kind of good-looking young woman who was capable of having male friends as well as lovers. People liked her quite aside from her sexual allure, which was considerable.

And now Bobbie is dead, evidently a suicide technically — but in another sense, which everybody intuitively senses, actually a casualty of war: “Roberta Arnstein, 32 years old, killed in the war between the Drug Enforcement Administration and Hugh Marston Hefner. A good soldier, she will be mourned by her messmates.”

Hefner is rich enough that he can’t be put in prison as easily as some poor black radical who happens to irritate the government. Hef has two hundred million dollars, which is enough to keep the courts snarled up for a hell of a long time. The bureaucrats whom he has offended know that he will take a lot of time and energy; but they have faith in themselves and in their government. It took a long time to get Jimmy Hoffa, but when you’ve been in this business as long as some of those birds in DEA you know that the real Establishment is made up of men who could lose‘ Hefner’s two hundred million in a day and feel only mildly irritated at the bother. So landing Hef on the deck with a spear in him is a long and tricky expedition; but it can be done. Bobbie Arnstein is the first casualty in the first battle of that war. 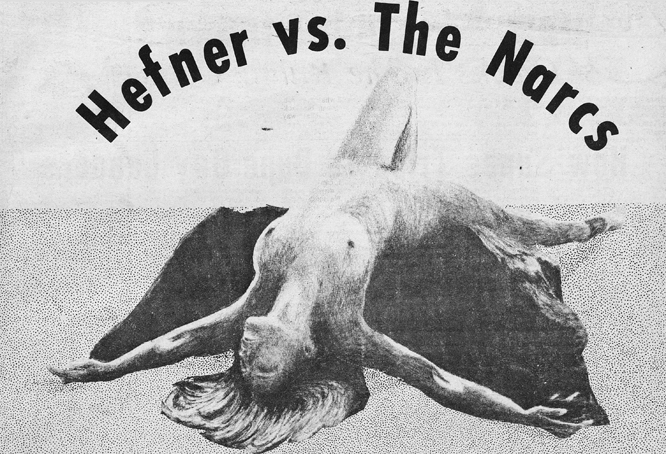 “The War on Drugs,” Nixon used to call it, in his most unctuous style, nearly cackling like Uriah Heep on the TV screen of official reality. Typical Nixonian schizologia. There is no “war” against drugs: drugs cannot be the object of the verb “to make war.” It is a war on people, like any other war. People are being killed and tortured, just like Vietnam or Gettysburg in The Birth of a Nation. People are being driven to suicide, like Bobbie Arnstein; people are being caged and brutalized and homosexually raped (one guy in a Missouri prison was forcibly buggered 40 times a few years ago: a rare case in that it got publicized); people are being slaughtered, physically and psychologically. It is as mean and dirty as any other war, and it is against people, not against drugs. The drugs aren’t being punished at all. Drugs are insensate.

The Drug Enforcement Administration has the morals of a scorpion, the mental set of Ghenghis Khan and the general love ability of the Gestapo, combined with the fanaticism of the Holy Inquisition, the ferocity of Anthony Comstock and the frenzy of a Fundamentalist. It is the kind of organization that seems to belong naturally in Stalin’s Russia; nobody can ever possibly believe that such an apparatus of terror exists right here, under the noses of the ACLU, until it has stomped into your own life, and then it is too late to warn others.

As novelist William S. Burroughs has soberly stated: The standard practices of young people to become informants under the threat of prison if they don’t cooperate, or of undercover agents encouraging narcotics violations in order to run up a score of arrests, pose a threat to common decency and an American way of life in which one can reasonably take pride.

Ram Dass says in the same connection: I also think such practices are ill-advised because they just increase the paranoia of human beings toward one another. The lack of respect for the privacy and dignity of the individual is a sign of the sickness of the times.

Dr. Joel Fort, former drug advisor to evidence for an indictment but want to put the World Health Organization, warned explicity in 1970: In some ways we are really moving closer to the Orwellian world of 1984, and the tactics of the drug police are indistinguishable from those of the Communists and other totalitarians … The end in no way justifies the means.*

Since Fort’s warning, things have not grown better but have steadily moved further into totalitarianism and terror. It is a real war, against real people. As Dr. Thomas Szasz wrote bitterly, “The Germans spoke of having a ‘Jewish problem,’ and we now speak of having a ‘drug abuse problem.’ Actually, ‘Jewish problem’ was the name the Germans gave to the persecution of the Jews; ‚drug-abuse problem‘ is the name we give to the persecution of people who use certain drugs.”**

The only difference is that Hitler lacked the hypocrisy to pretend he was helping the Jews, whereas the DEA insists that it is trying to help the group against whom it is waging a war of extermination, the group which prefers Oriental drugs to Occidental drugs.

(It is not really a war against drug-users in general, but by the users of European activist drugs against the users of Near and Far Eastern sensitizing drugs. It is part of the racist-sexist war for the domination of the planet by one type of Aryan male.)

The phrase “war of extermination” is hardly an exaggeration. Already, Michael Aldrich, Ph.D. has written an essay “Psychedelic Genocide,” comparing the current wave of terror with similar drugcentered religious persecutions of the past, against Europe’s witches or the brujos of Mexico and Central America. The Mexican Inquisition finally killed 15 million before its fury was abated; Don Juan Matus, in Tales of Power, tells Carlos that the only part of the peyote tradition that survived was the part that could not be killed. The bullets of Kent State, still protected by the bias of juries against legal justice, were aimed directly at the heart of youth where the transformation from Western aggressivity to Eastern mysticism is occuring, largely due to the influence of these drugs.

In America’s millionaire class, nobody else spoke up for youth, for pot, for pacifism, for the cultural transformation, except Hugh Hefner. The bureaucrats were not going to take that lying down, you can be sure and now they are “investigating” him. They never announce that they’re “investigating” somebody when they have evidence that he’s a criminal; then, they file charges. They announce that they’re “investigating” you (as they did with Hoffa the Infamous) when they don’t have enough evidence for an indictment but want to put you on trial in the newspapers while they continue fishing and hoping.

So, they’re out to get Hef, and one loyal woman got in their way. And they crushed her casually and moved on to a better battle position.

Frankly, I believe Bobbie’s suicide note in which she says she was framed on cocaine charges for which she got 15 years. (15 years in a cave! For getting high in a different way than the judge gets high!) She had no reason to lie when she was getting ready to kill herself. The motive of the frame-up is obvious; the only way to hook a fish like Hefner, who lives surrounded by burglar alarms and loyal retainers, is to have a fink inside his battle-lines, like say a Private Secretary, which coincidentally was Bobbie Arnstein’s job. The DEA agents are experts at turning the most benevolent people into informers or saboteurs against one another. “All you gotta do is plant it in his desk and give us the signal.”

Dr. Timothy Leary tried to warn us for ten years. As recently as May 1974 (just before, he disappeared), Dr. Leary wrote in The Curse of the Oval Room: Very few Americans, even in these post-Watergate days, understand how Nixon set up his very own Special Service elite police, whose mission was to harass, intimidate, arrest and imprison dissenters. Under the guise of „drug control“ this Orwellian coup was accomplished with the approval of middle-aged liberals. It was so simple. The Narc budget jumped from 22 million to 140 million. Narcs are mood police, thought-police pursuing the victimless crime of cultural dissent. Constitutional rights were suspended and martial law (no-knock, stop-and-frisk, curfew etc.) was imposed selectively on one easily identifiable segment of the population … Fear descended upon this land. The spokesmen for the counterculture were arrested, harassed, silenced. The press cooperated completely. Slanting reporters, columnists, and editorial writers endorsed the dope-pogrom and piously denounced the counter-culture …

Don’t you realize that this recent wave of repression is a check-out test to see where we’re at and where we want to go?

Hugh Hefner realizes that now, if he never did before; and he liked Bobbie Arnstein a great deal. One can almost wonder if Hef might finally graduate from liberalism to radicalism. The thought of a radical with two hundred million is a vista to make the head spin, and the DEA might really get the sense that they’re in a war where the other side has live ammunition, too; a millionaire taking on the federal bureaucracy invokes King Kong versus the Tyranosaurus, or similar oversize rumbles. It might get to be extremely interesting, e.g. if Hef decides to start printing in his 20-million circulation slick-sex book the kind of exposes of government that normally only circulate in underground publications.

At minimum, the public is soon going to be learning about the DEA the sort of things that made conservative men and women vomit and turn against Spiro and Dick finally. The FBI and CIA are already getting the Watergate treatment, but the DEA which is really (contrary to cliche) “ the most fascist of the three organizations will provide the kind of headlines that will make Mom and Pop out there on the porch in Des Moines think they’re living through old Robert Taylor movies set in Nazi Germany.

The Narcs will probably destroy Hef, in the long run: 200 million cannot fight the U.S. government. But he’s big enough and angry enough to inflict mortal wounds before he’s caged. A lot more people are going to be sorry about Bobbie’s Arnstein’s death in the future than are sorry about it now. 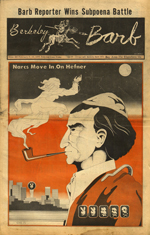 Hefner vs. The Narcs
by Robert Anton Wilson appeared in the Berkeley Barb, Issue 495 in February 1975.