Psychedelic Thumb
Growing Your Own Psilocybin

“No ordinary mushroom could do this, doctor — but a mushroom of superhuman intelligence…”
— from The Thing That Ate The Creature 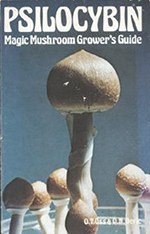 Gene Fowler once said that every publisher should have a pimp as an older brother, so he’d have someone to look up to. Every writer, and nowadays a lot of readers, will appreciate the justice of that estimate, but $4.95 for a 63-page book is still an act of what the French might call magnificent outrage. That’s better than seven cents per page and it’s not even printed on gold leaf.

However, after one is through reflecting on the avarice of publishers, this little book doe’s deserve a hymn of praise for the research and wit it contains. Only narcs and the major drug dealers, that oddly symbiotic alliance, can possibly oppose the self-evident intent of the authors, which is to teach the reader how to make pure, undiluted, 100 percent safe neurochemicals at home, and thereby avoid the hazards of the black market.

It is indeed a splendid dream. Imagine: every Head in the country begins growing his or her own magic psilocybin mushrooms. Funny fungi sprouting everywhere. Millions, then billions of golden-headed darlings bringing the most ancient Mayan secrets to meta-phase nervous systems, coast to coast. The local distributor of mescaline-cut-cut-with-garbage, which he calls LSD, pounds on the door desparately, “Hey, I’m selling blotter at 10 cents a hit this week” — and nobody answers. The narcs race frantically from window-box to window-box sniffing for forbidden spores, but they know in their bones it’s a hopeless task: who can arrest the spread of a versatile fungus that duplicates both sexually and somatogamically?

I am told by those who have more botanical savvy, than myself that the methods in this book really work and can produce huge and fulsome mushroom harvests anywhere in the world, despite climate and weather variations. You can grow them in your own pad: no garden needed. In a closet at the place you work. Under the stairs at City Hall. Have a little bit of mystical old Mexico with you wherever you go. I must add that, for me, the most enjoyable part of this book is the introduction, in which the authors offer their own theory about the origin and goals of the magic mushrooms.

“I am old,” they quote one of the mushrooms as telling them telepathically during a ceremony, “older than your species, which is itself 50 times older than your history. Though I have been on earth for ages I am from the stars…”

Well, yeah: anybody who’s been into deep meditation with the sacred mushroom will buy that. Hell, I’d believe that Psilocybin came from outside the light-cone entirely: beyond space-time, from Wheeler’s super-space or Plato’s Ideal World.

The only thing wrong with this book, aside from the price, is that they forgot to mention that you should always absolutely in every case whatever the circumstances play Beethoven’s Ninth during the third hour of the mushroom experience. With earphones and your eyes closed. Then o dearly beloved may you find the Gold of the Philosophers, the Stone of the Wise, the Medicine of Metals, the Rosy Cross, True Wisdom and Perfect Happiness. Io Pan Io Pangenitor Io Panphage Hagios Hagios Hagios IAO. 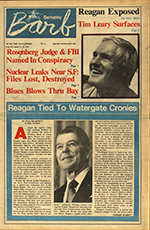 Growing Your Own Psilocybin
by Robert Anton Wilson appeared in Berkeley Barb, Issue 574 in August 1976.