Scores of friends and fans gathered at the grave of Marilyn Monroe on Friday, still starstruck 26 years after the death of Hollywood’s most enduring sex goddess…

Robert Slatzer announced the formation of the Marilyn Monroe Foundation, dedicated to creating a library and museum in her honor. “Her memory has outlasted her critics,” Slatzer said…

Each mourner placed a red rose on the crypt…

(Marilyn’s) nude body was found in the bedroom of her Brentwood home, an empty bottle of sedatives nearby. The death was ruled a suicide, although more sinister speculations persist, including theories she was killed because of White House romances with the Kennedys.

Approximately thirty years later, the same results would probably appear. The last time I looked in the detective section of a bookstore, eight of Chandler’s books—and most of his life’s work—were back in print again (and I doubt that they ever went out of print, except briefly). Looking at the menu channel of my TV I have noted in the last month alone that there have been five of Marilyn’s movies offered to Los Angeles viewers.

The world has changed immeasurably in these three decades: nobody writes the Chandler type
“hard-boiled” novel anymore (except as parody) and no contemporary actress works in Monroe’s style, but both Chandler and Monroe have outlived the fashions which they originally embodied. They each expressed something unique and magical about that Southern California culture which Chandler once called “The Golden Graveyard.”

It is provocative that both artists are chiefly known through what Yeats would call their Masks. Even Chandler’s most devout fans don’t find his life very interesting—he showed unusual bravery during World War I, married a woman much older than himself and had a drinking problem off and on after reaching middle age; there’s not much else worth knowing. But millions are still mesmerized by the Mask that Chandler created—the marvelous narrative voice that calls itself “Philip Marlowe,” pretends to be a private detective working on some particularly nasty cases, and dazzles us by revealing more concrete specifics of the top and bottom of our society than any sociologist could and telling us about it in a way that only a consortium of five poets and three professional stand-up comics could hope to duplicate. “Marlowe” is by no stretch of the imagination a real detective: he is a focus through which Chandler managed to unify the discordant voices of the sociologist, the poet and the comedian in himself.

Similarly, “Marilyn Monroe” was a Mask worn by a woman actually named Norma Jean Mortenson. Norma Jean’s life was a great deal more interesting than Chandler’s: she was born a bastard; her mother was hauled off to the loony bin shortly thereafter; she grew up in a series of orphanages and foster homes; she married in her teens (obviously trying to find a stable point in a whirling world); the marriage crashed; and she began manufacturing the Mask that became “Marilyn Monroe.”

Norma Jean was a good-looking but hardly striking brunette; “Marilyn” became the Blonde Bombshell who could provoke a bishop to dance a jig on the ceiling of his cathedral. The invention of “Marilyn” was, indeed, one of the great engineering feats in American technological history. Norma Jean studied glamour the way Napoleon studied war; she lifted weights, and even jogged daily and did yoga 20 years before either was fashionable. She literally created the body that suited the Mask. At the peak of her career, she had her dresses sewn together after she was in them, to provide maximum advertising of her newly-created natural assets.

Try it sometime. It may not lead to Perfect Enlightenment, but I wager it will produce an Altered State of Consciousness. You might even become more photogenic—as she certainly did.

When “Marilyn” was asked how she felt about being a Sex Symbol, she replied, without benefit of press agent, “There are worse things to be a Symbol of.” Somehow I always think of that whenever I consider the kind of symbolism that Ronald Reagan evoked to graduate from B movies to the White House…

After the notorious “nude calendar” incident (about which Norma Jean herself indirectly leaked to the press, knowing more about PR than the studio heads of the time), she began practicing her “dumb blonde” routine off screen as well as on. “Didn’t you have anything on when that picture was taken?” an interviewer asked. “I had the radio on,” said “Marilyn,” just like Gracie Allen.

Norma Jean’s friends knew that she read and could talk intelligently about such writers as Rilke, Whitman, and Joyce; she also wrote poetry with occasional memorable lines in it. Despite that, she remained the frightened little orphan girl, who perpetually tried to heal her anxieties with Christian Science and returned to Science and Health With Key to the Scriptures whenever the going got rough.

“Marilyn,” on the other hand, once told a startled interviewer that she was an atheist, causing the “dumb blonde” image to go out of focus a bit. Dumb Blondes can’t be atheists; they don’t even know what the word means. The Mask and the Anti-Mask were apt to get confused at times, especially since “Marilyn,” the atheist, didn’t believe in Christian Science and was inclined to resort to booze and downers whenever the anxieties of her youth returned to haunt her.

One of them—“Marilyn” or Norma Jean—believed in astrology and claimed that, as a Gemini, she was predestined to be two persons. But—wait—that must have been a Third Mind speaking. It is hard to see how either a Christian Scientist or an atheist can believe in astrological predestination.

Everybody “knows” the explanation for Norma Jean’s emotional instability—she was raped at the age of twelve. Anthony Summers in the above-mentioned Goddess shows that there is considerable doubt about that explanation. “Marilyn” seems to have been a compulsive liar (like many actors and actresses…) or, in kinder language, she led a very rich fantasy-life. She told so many untrue stories to the press, and to intimates, that Summers‘ search for the truth often reads like a sequel to Rashomon. In particular, she told no many versions of the rape story that one can only conclude that it was either too horrible to remember or else she invented it in one of her endless maneuvers to win the love and pity of the whole world.

My own favorite version of “Marilyn’s” introduction to sex was something she told a photographer later interviewed by the indefatigable Summers. The photographer had asked how old “Marilyn” was when she first had sex. “Seven,” she replied in her normal voice. “My God,” the photographer cried, “how old was the man?” Back came the answer in “Marilyn’s” professional bedroom-whisper voice, “Younger…” I don’t believe Mr. Julius Marx ever became one with his Mask, Groucho, any more successfully than Norma Jean became “Marilyn” at that moment; but we still don’t know how many of her other stories were Put-Ons like that and how many were true. We don’t even know how many she believed were true.

This much I think is accurate: she did more for the Sexual Revolution than Kinsey and Hugh Hefner together. In Hollywood, before the Norma Jean Phenomenon, there were only Sexy Women and Innocent Women. Marilyn was the first, and remains the best, Sexy-Innocent Woman. She projected a kind of sexuality, like that of Eve in Eden, totally without sin or shame. Norma Jean had manufactured more than a Star when she created “Marilyn”: she had produced a Goddess. Nobody has ever applied that word to any other actress one-tenth as often as it has been applied to “Marilyn.” You would guess Summers‘ book Goddess was probably about her even if it didn’t have her face on the cover. Even the Santa Monica Outlook calls her a goddess in the first paragraph of the story I quoted earlier.

That’s why the mourners are dropping red roses on her grave 26 years after she died. When the Mask becomes Archetype, the collective unconscious resonates in time. Marilyn is one with Inanna, whose descent into hell was mourned yearly in Sumer 4500 years ago, and Persephone whose similar underworld journey was mourned in Athens 2500 years ago, and the White Goddess whose sexuality and death are the poles of the yearly cycle of witch covens still surviving.

If “Marilyn” was a true Sex Goddess, in the Jungian sense, the Mask had, magically, devoured the woman behind it. Norma Jean learned to act, to dance, to sing—to switch from comedy to drama to musicals with apparent ease—but still feared that the Mask would fall off in public and her naked terrors would be revealed. Long before her death, she was “the late Marilyn Monroe” in Hollywood lore because of the crippling anxieties that often kept her off the set for hours while she fought to conquer her doubts and uncertainties. (Norma Jean still resorted to Science and Health; when “Marilyn,” even more desperate, was in charge, she grabbed for the Seconal bottle.)

As Summers documents this struggle, one realizes that “Marilyn’s” so-called heavy dramatic roles—the schizophrenic baby-sitter in Don’t Bother to Knock, the ambitious hustler in Bus Stop—required less real art and hard work than the sexy-funny girls she played in her lighter roles. Schizophrenia and ambition were closer to the real Norma Jean than light comedy ever was. If she somehow drove off the demons long enough to appear the funniest actress around when that was required of her, it was a feat as remarkable as a one-legged man winning a tennis game.

Outside the bright gardens had a haunted look, as though small wild eyes were watching me from behind the bushes, as though the sunshine itself had a mysterious something in its light. I got into my car and drove off down the hill.

What did it matter where you lay once you were dead? Ina dirty sump or in a marble tower on top of a high hill? You were dead, you were sleeping the big sleep, you were not bothered by things like that. Oil and water were the same as wind and air to you. You just slept the big sleep, not caring about the nastiness of how you died or where you fell.

All that we can say about the circumstances of Marilyn’s death is that there was a cover-up. We can only guess how much was covered up. To paraphrase an Elizabethan jurist, “Marilyn” lived like a Star and, like a Star that troubled the firmament, it was decreed that she must fall.

The archetype remains, above the nastiness of history. Inanna, Ishtar and all the goddesses who descended to Hell, all arose again and reigned in the skies. Norma Jean, caught in whatever cruel cross-fire of the perpetual wars of our power elite, is dead and we may never fully know why or how, but “Marilyn Monroe” survives, and will survive, and the red roses will be worshipfully laid on her grave again next year. 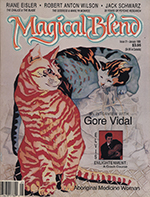