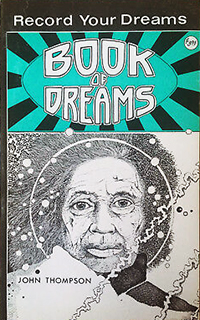 John Thompson’s work has been familiar to me since about 1967 when I first saw some of his psychedelic drawings in the San Francisco Oracle and the Berkeley Barb and I went around asking everyone “Who the hell is that artist who did those incredible illustrations ?”

Later during the grim years of the Nixon counter-revolutions I saw some of the underground comics John produced and was stunned once again. When And/Or Press informed me they had hired John to illustrate my book Cosmic Trigger I was thrilled as a cat getting loose in a tuna factory. If And/Or hat managed to bring back Blake to illustrate my text my text by means of necromancy I wouldn’t have been more thrilled. John Thompson is the contemporary American Blake: An artist of such technical versatility and mythic-magic-mystic intuition that leafing through his work is like a guided tour through heaven, hell, and the collective unconscious and the past and future terrestrial & extraterrestrial evolution.

In this book John has provided a valuable tool for all students of consciousness whether they regard themselves as psychologists, parapsychologists, or religious mystics. Many sages, both before Freud (I Ching, the Hermeticists) and after Freud (Jung and J.W. Dunn) have understood the psychoanalytic truism that the study of dreams is the royal road to knowledge of the True Self lying behind the superficial social ego.

If you use this book for a full year as John intends you will not only begin to understand more about the True Self but you will also learn many surprising things concerning the great system of cycles and correspondences which condition human behavior. It really doesn’t matter whether you prefer to explain such cosmic correspondences by the theory of astrology, by Jungian synchronicity, by the magical lore of contagents, or by the models of modern physics (the quantum inseperability principle; Bell’s theorem; or Dr. Evan H. Walker’s hypothesis that consciousness is the hidden variable determining the seemingly “random” “coincidental” of the “paranormal”) The mystical correspondences, however you account for them, are there; and using this book for a year will give you a richer, deeper, wider sense of how the True Self operates at the mind/matter interface. Without such understanding we are merely conditioned by the correspondences — or automatons in Gurdjieff’s terms; or robots as Leary says. With understanding of the cycles and correspondences we can begin to free our minds, recognize the True Self, and begin to derobotize our behavior.

Some people will have trouble remembering their dreams. This book will help them to develope the habit of remembering. But even before that happens the book is still valuable. You can record the results of meditation, or any other consciousness expanding technique or techniques that you may be practicing. You can record “coincidences” and synchronicities or you can simply daydream and fantasize for a few minutes a day and record the results of that. In the end of a year you will have a record that will astonish, re-educate, and illuminate you.

WARNING: It is necessary to remind you that several thousand years of such experimentation by shamans psychologists indicate that increased self knowledge leads inevitably and irrevocably to accelerated self transformation and can even result in such socially dangerous mutations as compassion, joy, humor, optimism and a growing inability to blame others for your problems and a sense of responsibility. If you are not prepared for such metamorphoses don’t intend to use this book, just buy it for John’s wonderful illustrations. On that level alone it is still a fantastic bargain.