Nobody dares to say a word against the past or the present these days. After all, whether we have been involved in the “Consciousness Movement” or not, we have all heard about the psycho-spiritual necessity of accepting the past, right? We all know that we must forgive our parents and teachers and everybody else who made us the wrecks that we are (and some of us are even aware that we may need some forgiving ourselves); we know that to carry negative feelings from 20 years ago, or even from yesterday, is bad for our mental health. And the present is equally sacrosanct: you can’t “be here now” unless you accept the here-now unconditionally.

That leaves no place to dump our negative feelings but the future, and those who have not yet learned to live entirely without hositilities have picked the future as the target for all wrath. A horde of professional fear-mongers and nay-sayers snarl at us in all media, projecting a future that seems to be made up of equal parts of Fundamentalist-Apocalyptic doom, science-fiction dystopia and the nightmares we had as children after seeing our first horror movie. When these voices are not predicting World War III, they are predicting a worse Depression than 1929; when they are not prophecizing either of those cheerful pictures, they invite us to prepare for ecological disaster, or for a pole shift that will tip the earth off its axis.

This, I submit, is absurd. If there is any place where our much-publicized “free will” can act, it is precisely in the interstices between the present and the future. We cannot change the past—except insofar as it changes by being transcended, when we forgive it, or, even more, understand it—but we are all co-creators of the future. We all literally create our own future, minute by minute, as we go along; and, by the multiplication of energy (“karma”) we are all creating our collective future synergetically. That is, to assume that only the “bad guys” (whoever they are) will determine the future is to assume the non-existence or non-effectiveness of love, hope, intelligence and many other qualities that are known to exist and to be effective.

There is nothing esoteric about this. Very concretely, you can, right now, think of somebody who hurt you once, and you can plan an elaborate revenge. Think of such a person, but do not go ahead with the vengeance scenario. Instead, make a conscious act of forgiveness. If you are new to Consciousness Work, just realize that bad energy is depressing to hang onto, and forgive only because you want to get rid of the bad energy. Make a decision either to not think of that person again or to think of them impartially, the way you think of rocks, because carrying around bad energy drags you down.

If you have followed this exercise to any degree, you have already influenced the future. You have chosen between alternative paths, rejecting the one that leads to more negative energy (“bad karma”) and choosing the one that generates positive vibes (“good karma.”) Since most of us have, somewhere in the back of our minds, a million and one grudges (ranging from the rational, or almost rational, to the totally irrational) you can do this exercise once a day, or even twice a day, for many years; and each time, you will be choosing a positive future-line instead of a negative one.

“We are all Free Masons,” said Adam Weishaupt. “We are co-creators of the universe,” said Gary Snyder. Exercises like this will help you understand what such gnomic sayings mean. When you can perform several such acts of Conscious Choice in a single hour, you will be on your way to becoming a very efficient architect of the future. You will also find yourself less and less worried that the “bad guys” are going to control everything, because you will be controlling more and more of what happens.

Aleister Crowley once defined Magick as “the science and art of causing change by act of Will.” Few can either understand that or believe what it implies. Occultist-psychologist Dr. Israel Regardie, may his tribe increase, offers the plausible alternative: “Magick is a mnemonic system of psychology to train the Will and Imagination.” The obvious reply is: “Sounds groovy, but how do I do it?” Futurist Barbara Marx Hubbard puts it in a nutshell that almost anyone can crack: “The future,” she says, “exists first in Imagination, then in Will, then in Reality.” Got it?

The future, until it concretely exists, is just the mental area where our unconscious is Writ Large. The nay-sayers are full of unconscious masochism or sadism or both: they want to see somebody punished, but only a psychoanalyst or a bile specialist can say for sure whether their chief bitterness is against themselves or against the rest of us. But there are many alternative
futures, and it is not just the nay-sayers alone who will choose which future manifests in our individual time-lines. We all get to vote on it, and (unlike a democratic election) those who Imagine and Will most strongly get a proportionally larger vote. (This will only become democratic when everybody has an equally strong Will and Imagination.)

You are doing this all the time—choosing time-lines into alternative futures—and Magick or Mind-Science just consists of doing it more consciously, and, therefore, more intelligently.

Alvin Toffler, a professional Futurist, has a scenario in which the computer replaces the factory and office, and we get a society as rustic and decentralized as Industrialism has been urban and centralized. If you like that, get Toffler’s book, The Third Wave, learn to imagine that future more vividly, put your Will behind it, and you will soon be acting very intelligently to manifest it. Timothy Leary has a more Promethean future, based on Space Migration plus Intelligence Increase plus Life Extension (SMI²LE.) If that turns you on, get Leary’s Exo-Psychology, put your Will and Imagination into this scenario, and intelligently help manifest it. Or read up on Werner Erhard’s Hunger Project, which aims to feed everybody on the planet by 1995; or Joan Baez’s future without wars; or read Alan Harrington’s The Immortalist, which projects a future without death. Or make up your own future, combining the best of all these, and the best of your own hopes and aspirations.

When you have a goal that is noble enough to inspire you, it will also be hedonic enough (in the classic philosophic sense) to keep you amused; you will soon be too busy to worry about the nay-sayers and doom-mongers.

As Marilyn Ferguson says, in The Aquarian Conspiracy, “Our past is not our potential. In any hour, with all the stubborn teachers and healers of history who called us to be our best selves, we can liberate the future.” Why not? However attractive the past or present might seem, the future is where we’re going to have to live in. 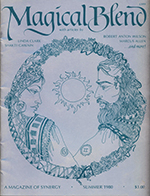