Economics in One Lesson

Among my other sins. I have written a book. It is called Sex and Drugs: A journey Beyond Limits (Playboy Press) but I am not the sort of sneaky character who would turn a whole column into a plug for his own book. (Although, if you’re really interested, I might mention that Stan Dale of KGO radio called it “A very important and entertaining book,” Tom McCann in WIN magazine wrote that it was “Factual material presented in a very entertaining way … A good part of the book is concerned with the type of sex magic Crowley practiced and taught … Well worth reading … It will save more than a few heads and even lives,” James Collins in FATE enthused „Truthful, independent and objective .. amusing … the best available account of sex and drugs in the modern world … accurate, complete and useful … can’t be beat,” the San Francisco PHOENIX said “A vast treasure chest of lore … unique,” Gay Times raved „A good and knowledgeable writer … a lot of research … a damned fine story teller … encyclopediac … humorous,” CITY magazine saluted me with “An enormous store of exotic erotic exoterica … a shipload of information delightful,” BALL called it “Essential for anyone concerned with either sex or drugs,” Dr. Timothy Leary said it was “Scholarly, hip, scientific, witty, well-written, skeptical … I think it’s great,” Alan Watts muttered ambiguously that it was “Obscene, subversive, blasphemous, esoteric and extremely interesting,” Publisher’s Weekly dubbed it “informative … light-hearted … valuable,” Dr. Israel Regardie praised it as “A damned fine book … I hope it sells like hot-cakes,” Kirkus Service said “Potentially Explosive … remarkably free from the Alice-in-Freakland logic so popular among drug scene apologists,” and so on, and so forth—but I don’t want to quote all the rave reviews it got, since the reader might think this column is just a tricky way of advertising the book, which is called SEX AND DRUGS, in case you forget, and is only $1.50 from Playboy Press.)

To Proceed: I have written this book (called SEX AND DRUGS, Playboy, $1.50) from original research onwards to finished, professionally typed manuscript. Now, what happens when somebody is good enough to buy a copy of the damned thing?

The clerk in the bookstore gets a certain commission for selling it, or he gets a straight salary at the end of the week. In either case, Uncle Sam takes a bite. The government in no way helped to sell the book, but Uncle takes his bite nonetheless. Chomp, chomp—and off goes part of the clerk’s earnings.

The owner of the store takes a profit, for being such a clever chap as to own the store and make other people work for him as clerks. Out of this profit, Uncle comes along and takes another huge chomping bite.

If the owner actually rents the shop, the landlord gets a piece of the action next, known as rent. Uncle descends quick as a vulture and takes a bite out of the rent, too. Chomp, chomp.

Now, a salesman from the publishers has placed the books with this shoppe, he gets a bit of the long green since they are selling. Uncle smells the cash immediately and leaps forward again, fanged like Dracula, to take another chomp.

Come now to the print shop. The workers who actually set the volume into type get paid—and their checks all have big tooth-marks. Yes: Uncle has been feeding again. He’s taken as much as 20% of their salaries (if they happen to be bachelors.) No, he didn’t set the type, anymore than he shipped the books to the bookshop or owned the land the shoppe stands on, but he bites down like an alligator anyway, and nobody is strong enough to resist him.

Look next at the owner of the print shop. He adds up his profits, sighs—and Uncle is there chewing away, taking a chunk out of this part of the process also.

Go back to the publisher’s office with me. The artist who designed the jacket—Uncle has chewed a piece out of his salary, too. The editors who added the misprints and awkward sentences to make me scream when I saw the first copy (standard publishing procedure)—they look into their pay envelopes and find that Uncle has been nibbling there, too. And Hef himself, the publisher—they’re chewing millions out of him, of course. He’s rich.

Eventually, the smallest part of the customer’s dollar finds its way back to me, the author—and, you guessed it. Uncle pounces again (CRUCH! GRAAHG! CHOMP!!—just like McLure’s mountain lion poetry) and chews up as much as he can.

Economics is supposed to be even more “occult” than Cabalistic magick and the cause of inflation is reputed to be a mystery more enigmatic than the cipher in Genesis. Maybe. On the other hand, maybe it’s just as simple as it looks and Uncle pays people to say it’s too complicated for you and me to understand. From down here, it looks like we’re being eaten up by a monster. 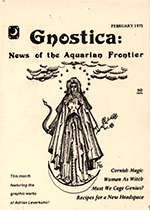 Economics in One Lesson
appeared in Robert Anton Wilson’s column “All Hail the Goddess Eris!” in Gnostica: News of the Aquarian Frontier, Issue 30 in February 1975.