CHAPPAQUA
A Non-Review of a Non-Movie

In the loft on Centre Street two years ago I first heard about it from Bill Burroughs. “A movie being made by a young friend of mine. I play the spirit of addiction.” And the same night Burroughs said, over martinis, “It is precisely word-lines, lines of word and image and association, which keep you imprisoned in present time, right where you are sitting now.”

And now here it is with technicolor and feature-length 90 minutes running time and Burroughs and Allan Ginsberg and Ed and Tuli and the great Jean-Louis Barrault and beautiful Paula Pritchett and Swami Satchidananda and Stonehenge older than time and Cherokee peyote rites and Moondog and music by Ravi Shankar and J.S. Bach — Step right up, Jung and old, it’s good for man and bestiality, CHAPPAQUA by Conrad Rooks — the first movie, the end of the road for all stage traditions, all Hollywoodism, all half-way Mekas and Warhol compromise — the psychedelic cinema art perfected in one giant step — all lines of word and image and association smashed, shredded, cut-up, permutated, into a form musical and mathematical — a visual banquet with course after course of naked lunches, reality sandwiches and Latest Spiritual Discoveries — “The Way Out” said Confucius “is via the door, how is it that nobody will try this method?” — The Way Out is here before us, this minute, this film, a complete religious and cosmic view of All-Time and All-Space, beyond the limits of the body-cage, and yet miraculously incarnate in a theater seat, “right where you are sitting now.”

A small city in upstate New York, of a boy 2 billion years later in Chappaqua, out tentacles that will reach to the birth in the primordial ocean is reaching dagger into Ceasar and the first jelly-fish on Centre Street, Brutus is plunging his where you are sitting now, in a loft like a waterfall in your ears. Right and listen to the hymn of the Road chief surface, dig? Come to peyote in sandals see islands only when you are on the waters below the earth. You see appeared on earth or in the sky or is no things. No such animal has ever mistaking for a thing. But there are over language has hypnotized us into in the riddle, a gestalt function, which things. The self is, like the fist things in motion and motion in the eye sees noun and verb as one: us damned stupid Occidentals that Long ago Fen-Lo-Sah pointed out to that every verb must have a subject. With semantic spooks in its insistence that the English language, populates the world to have meaning because our usual code, your hand? is a question that appears “Where does your fist go when you open experience, but the structure of the code. The original non-verbal gestalt-Tao of to perception, not the structure of damned code, I don’t care what it is, gives not a dog to come when you whistle. Any message. Aztec world, not our world; truth mediu, as McLuhan says, is always the kinds of scanning patterns, and the animal. All that exists are various perception — because there is no such system of Man can abstract it from crude “reality” anymore than the nervous course it is. The camera can sever show that “The camera is a liar.” Of Eisenstein said.

“If you went away, where would you go?”
“Probably to Chappaqua.”
“Where?”
“A Chappaqua.”
“Parlez-moi de Chappaqua. Je crois que c’est une source..a spring?”
“It means the sacred place of running waters. It’s where the tribes come to bury their dead. The Indians are all gone, vanished. All the reasons for me to come here to this clinic started with peyote. I came across this friend who had this peyote. You eat it because they say you get high. And I ate this. I ate much. A great amount. And I waited. I had this vision. Here, inside, I saw a circle of yellow gold, like an illumination… The Indians did dance here… they are all gone now… Only the arrowheads remain…”

A young boy, hooked two ways (booze and horse); an aged, wise, very stupid French psychiatrist who says “Descartes was my grandfather”; they cannot communicate. The psychiatrist is curing the boy’s addictions, but the psychiatrist himself is addicted to the symbol-system of Indo-European semantics, and he cannot be cured. He remains trapped in present time, right where he is sitting now, while the addicted boy escapes into Eternity. That, in a nutshell, is the “plot” of CHAPPAQUA, a film by Conrad Rooks. The plot has little to do with the action, which is the escape of the audience, along with the hero, into Eternity. CHAPPAQUA, the first film to use Burroughs‘ cut-up technique, proves that technique is even better adapted to cinema than it is to the printed page. Movies will never be the same again. You and I will never be the same again. Maybe it is Apocalypse, a freak-out for all the minds alive, and even LBJ will stop killing babies.

William S. Burroughs is not only a great writer but also a great actor — His performance as Opium Jones, the spirit of addiction, is the creepiest characterization since the late great Bela appeared as the Transylvanian Count — In the deepest unconscious we find, not fantasy, but telepath — Aztec gods fed on human hearts — But the real star is, of course, the maker of the film, Conrad Rooks, who also portrays the multiple addict — Perls, Hefferline and Goodman propose, in GESTALT THERAPY, that the conception of the mind separated from the body and environment is not a scientific error (as the behaviorist think), nor even a semantic error (as Korzybski believed), but an inevitable neuroses developed by animals trying to live in chronic low-grade-emergency — Chronic low-grade emergency is the condition of Authoritarian culture — You see islands because you are on the surface — You are on the surface because you fear to plunge — You fear to plunge because your muscles are “armored”, not against the outside but precisely against the inside — The animals who wear clothes and come up out at subways to toil in offices and refuse to know that they have the hearts and livers and genitals and blood of the gorilla and deer and bull and deg in-side then — Every adjustment works: homeostasis — Booze and heroin “worked” for a while for the hero of CHAPPAQUA — LBJ’s Vietnam policy is “working”, — and psychoanalysis and communism and the Catholic church all “work”, — as long as this animal does not look below the surface — Peyote took the hero of CHAPPAQUA below the surface — After that, nothing works unless it works in Eternity — The Indians are gone. Only the arrowheads remain, right where you are sitting now. 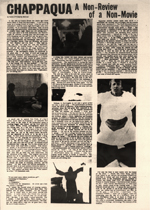 Imported stiletto pocket knife only $1.75 — I descended the burning city of bridges and the priests shook their escalators — The Field Marshall takes a special interest in Boys Clubs — Hear whispered secret conversations through solid walls — Super-Spy lets you see — Johnson of docile nature seeks woman experienced in discipline — In the loft on Centre Street over martinis and Moondog form musical and mathematical — beyond the limits of the boy 2 billion years later in Chappaqua — like a waterfall in your ears — In the riddle, a gestalt function to come when you whistle — “Reality” is a liar — Disgrace to the uniform refused an order with leather on women — the bridge persists — Landru as well as Napoleon to see that the “cage” and the ego are a furred tail upon nothingness — Christian value entering hutches at night, never eating the rabbits but only sucking their blood — into Eternity is Apocalypse, a freak-out to blow the head off the old girl in the harbor — One thousand two thousand three thousand four thousand five thousand six thousand years we’ve carried your bundles grown your corn worked your machines licked your boots ate your shit and for what? — More punishment? More deterrence? — More shit? — When did you ever give us a clean shuffle or a fresh deck? — Wasn’t it always the same crooked deal with the same marked cards? — Vampiric Capitalistic Moon — Yog-Sothoth works underground — Corpses are set to banquet and the entire lay-out monsters — Not fantasy, buy animals trying to live in chronic subways — and blood of the gorilla — the burning guerilla will haunt you forever — and stink of blood and napalm.

For only the flesh is holy — battle with the Emmy of the Stars — finally into Outer Space and the from Indian to me and you and escaping of flesh from jelly-fish to Indian and cave darkness, the single sacred river in the Orgasmic spiral, wombed in Female that Never Dies (TAO TE CHING) — Water Woman or Peyote Woman — The Eternal to the Mother, the Sea — They call her like Odysseus, we come back at last, always, place of the running water — Like Ishmael, bread and wine — It means the sacred never walk on the ground or eat of the Minds drugged by maps and menus that of CHAPPAQUA are real; so are the gods — call it God — I don’t know — The monsters ORDER — some call it Orgone, some call converging upon the idea of a NATURAL form of live intelligence today is as much to Pound as to Burroughs — Every Rooks, whether he knows it or not, owes is profoundly Buddhistic, like haiku — has always been montage, and montage The essence of the medium. 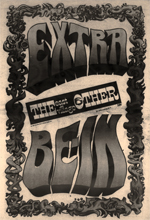 Chappaqua: A Non-Review of a Non-Movie
by “Kevin O’Flaherty McCool” (mosprobably Robert Anton Wilson) appeared in The East Village Other, Volume 2, Issue 11 in May 1967.