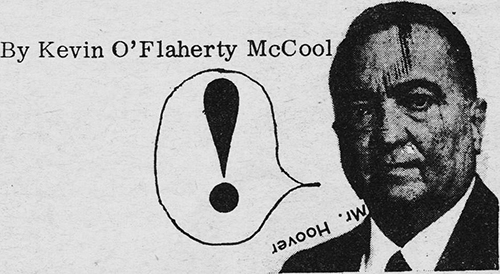 Last night I dreamed I was writing an article about the greatest movie of the year, Morgan and I called it “The Burning Gorilla.” When I woke up the title was suddenly meaningless. There was a Joycean/Freudian pun afloat in my mind: the burning guerilla doused by Dow Chemicals napalm in Vietnam// and the central image of the movie, the burning gorilla on the motorcycle.

The biggest joke in the movie, of course, is not what most of the audience laughs at. The biggest joke is Morgan Delt’s quietly spoken line, “My mental condition is highly illegal.” It takes a head to recognize a head: I knew Morgan Delt had been on LSD a few minutes after the movie began. Most of the liberal square audience thinks Morgan is sick: that’s the ultimate cream of the jest.

The tragedy and comedy of Morgan Delt is that he happens to understand this. And because he has this terrible wisdom, society MUST lock him up.

You think I exaggerate? Consider the pointed question on one of Randy Wicker’s elegant buttons: BABIES KISS EVERY BODY – WHY CAN’T YOU? Answer in twenty-five words or less, or admit that we are all sick mammals.

Morgan knows that the zebras, the gorillas, the birds are all healthier than us. The most moving moment in the picture — his one real contact with his mother — is when he stands with her at Marx’s tomb and reads, passionately, the great line: “Philosophers hitherto have only tried to understand history. The problem, however, is to change it.” Morgan is not, as his mother says in another scene, “a traitor to his class.” His is the humanistic, and psychedelic, Marxism of the Philosophic-Economic Manuscripts, the Marxism which (as Erich Fromm has noticed) is a kind of Zen. The Marxism of the passage where Karl says that communism is not the same as community of property, that communism transcends both private AND collective property. The Marxism of Buddha saying in the Dhammapada, “The fool thinks, ‘This is my land, these are my sons,’ but the fool does not own his self much less land or sons.” The Marxism of the mammal flesh.

The burning gorilla — Morgan Delt on fire — should be the symbol of the new world-wide psychedelic Left. More than any State bureaucracy, Morgan Delt has the RIGHT to the great lines of the old Labor Party tune which runs through the movie: “We’ll keep the Red Flag flying still…”

And the child’s voice crying for help so pitifully in the background of this very funny movie; that isn’t so funny, is it? What does it mean? Sounds like a child is being beaten. Yes “A child is being beaten,” one of Freud’s classic papers. The most common of neurotic fantasies and dreams. The trademark of our mad civilization, which Morgan sees through, as the Cherokee Indians saw through it when they called the White ‘he-who-beats-his-children’.

Carl Denham was wrong. It wasn’t beauty that killed the beast. Beauty never would have hurt him, nor would he hurt her. It was the planes, thd goddam planes, emblems of our civilization. Even then they were, implicitly, carrying napalm.

Uranian Willy The Heavy Metal Kid. Now known as ‘Willy the Fink’ to his former associates…He wised up the marks…Total Exposure. Wise up all the marks everywhere. Show them the rigged wheel of Time-Life-Fortune…Towers Open Fire —

They say art doesn’t contain the prophetic value of science, but Bill Burroughs wrote that passage in Nova Express a couple of years before Charley Whitman got up on the Austin tower and pointed his rifle at God.

He wrote it even before the two guys on the two towers in Dallas — the one at the Book Depository, and the one at the railroad underpass — joined together to cut down in their crossfire the Butcher of the Bay of Pigs. Willy the Fink Faulkner told it all; he tried to wise up the marks. Total Exposure in Light in August and the hightowered Reverend Hightower, and again in Absolom, Absolom! Nobody was listening. Willy the Fink Reich also tried to wise up the marks; he exposed the Orgasm Death Gimmick in “The Cancer Biopathy,” but nobody paid any attention except the FDA who locked him up as quickly as Morgan Delt was locked up.

There will be others on other towers, many of them, like King Kong, like Morgan Delt, mammal-wise, beyond the con of humanity (that sado-masochistic perversion!) raising the rebellion of the living flesh against the makers of prisons.

Lyndon von Frankenstein, according to Fact magazine for October, has been on tranquilizers for ten years.

A BBC correspondent in Korea has described the effects of napalm as follows:

“In front of us a curious figure was standing a little crouched, legs straddled, arms held out from his sides. He had no eyes, and the whole of his body, nearly all of which was visible through tatters of burned rags, was covered with a hard black crust speckled with yellow pus. A Korean woman began to speak, and the interpreter said: ‘He has to stand, sir, cannot sit or lie.’ He has to stand because he was no longer covered with a skin, but with a crust like crackling which broke easily.” (Quoted by Edmund Wilson in The Cold War and the Income Tax) Napalm reaches a temperature of 1000 degrees Centigrade in a few seconds.

And now for the lighter side of the news. The bridal gown of Lucy Baines Johnson was so carefully kept secret that when “Women’s Wear Daily” revealed its design, reporters from that paper were barred from the wedding as punishment. The young couple, smiling and happy, were endlessly photographed. Even Lyndon looked happy.

George Hamilton, fiance of the other Johnson girl, was not required to go to Viet Nam and drop napalm on babies because he is the sole support of an aged mother. That’s what I read in the newspapers. Maybe Hemingway finally pulled the trigger because his famous built-in shit detector told him there was nothing left in America.

And now we take you to Averageville, U.S.A., where our roving reporter quizes Mrs. Betty Whiteprotestant, the recent victim of rape by a Negro beatnik commie.

“Awful, just awful. He made me do unnatural acts. He was a real Sex Fiend and kinda crazy like.”

“Have the police reported any leads to you, as to the identity of the suspect?”

“Naw, they ain’t got a clue, you know. Shall I tell you about the unnatural acts?”

“Some other time, Mrs. Whiteprotestant. This is a family station.”

“Yeah, well, but some of the families might profit from this. Now my George, if he knew about some of these unnatural acts, I wouldn’t always be pulling that headache and wrong-time-of-month jazz on him—”

“Yes, yes, thank you, Mrs. Whiteprotestant. And now back to Vietnam and the CLEAN side of the news.”

Waitaminit. Let’s get to the bottom of this whole con. Who rigged the Wheel of Life-Time-Fortune? Put Mr. Martin on the stand. Ask him: why does the suicide-rate vary with the interestrate? How do you MAKE money? What is the magic. For every $100 borrowed by producers, when interest is at five percent, the financers get back $105. How does the gimmick work? Are there really witches in the vaults of the Federal Reserve? Do they make the money out of NOTHING? Sen. Paul Douglas mentions millions every month flowing into the French Indo-China bank and thence into the Federal Reserve in New York, ever since this over-organized rumble in Vietnam started. What kind of crap you handing us, man? Do we breed for you like stallions, the get of our loins yours to dispose of in any stinking jungle anywhere? Put him on the stand. Ask him. Don’t take no Fifth Amendment for an answer. Or the burning Guerilla will haunt you forever.

Ask him. Where does that extra *$5 come from. Keep asking him. And count your war dead. 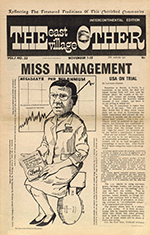