Permutations and combinations for LBJ

I would say our existence is like a bridge — They were living in the fourth world — Brother said: “I know goddam well you’re trying to drown me” — American life bomb went authoritarian — In the deepest levels of the unconscious we find not fantasies but telepathy — The mouth of Giant Disfigured Face says “Tonoqui, tetlati, tetkaati, teytoni, teixlileuh” — Giving money to MOONDOG as he played the upturned pails — Johnson interested in Discipline — I am the Hiroshima Werewolf — I eat human flesh — All opposites are contained in me — I am yin and yang — The psychoanalyst and the call girl, hip and square, the cannibal and the Christian, the vagina and the logarithm — I am the sadist and the victim, and the Werewolf Bridge between them — The guilt in the eyes of the victim and the accusation in the eyes of the sadist — I am the Hiroshima bomb and the picture of Rita Hayworth on the bomb —

Historians and other social scientists veritably swarmed into the various wartime agencies after 1941, especially the Office of War Information and the Office of Strategic Services — They were intimately associated with the war effort and with the shaping of public opinion to conform to the thesis of the pure and limpid idealism of the United States and our exclusive devotion to self-defense and world betterment through the sword — The opposition of historians and social scientists to the truth about World War II is many times greater than the opposition of the previous generation to the truth about World War I —

The Armistice of November 11, 1918, did not put an end to the Allied blockade of Germany — For many months after the war was over the Allies did not permit shipment of food to Germany — The Labour Party in England sponsored a humane “Save the Children” movement — But starvation continued to stalk “gaunt and livid through the streets of thousands of German towns” — In Paris, Wilson appealed again and again for a free export of foodstuffs to Germany, but always the French Government thwarted him —

I got a tombstone disposition and a graveyard mind — I’m a mean motherfucker and I don’t mind dying — The Equality Equation is always balanced — It’s what we call a Zero-Sum game — Whatever A gives B, B gives back in equal amount — You can call it Trade — This happens when both parties are “free” — The Authority Con works the other way — Bassackwards and upgefucked you might call it — Technically, it is known as the Thanatos Equation, One party is not “free” — This is a Profit, or Non-Zero Sum game — Party A, the authoritarian player, always wins — His gains mathematically equal the losses of Party B the gook or prole or lemmie, technically known as He-Who-Gets-Fucked — Party A eventually gets to own the whole planet, or solar system, or the friggin galaxy — The Werewolf Bridge between Party A and Party B is certain erotic and guilty looks in the eyes of the victim…

Many of Mr. Roosevelt’s acts and negotiations were secret, sometimes so secret that even the Secretary of State was not informed about them — Mr. Roosevelt acted for the most part without benefit of consultation or counselling from other s-He knew that the country as a whole would not accept his decisions. — In 1940 he told Churchill, “I may never declare war; I may make war” — The debits must now stand largely against the man to whom the credits were once awarded —

“No man in this civilization knows what he wants from women. They’re all hung up on the horns of the Orgasm-Death Gimmick.”

Well, yes, I said, but — did you think you might find out by killing all those poor women? Thirteen of them? — Even if you could find out, do the ends justify the means?

“If one man finds the truth,” the silky voice said, “even if a hundred women have to die for it, even if he himself has to die to satisfy the State’s own lust, all others might be liberated”

“I discovered a natural law”, the voice of silk and satin and strangulation said — “There is a limit to Eros — That limit is orgasm and sleep — It’s a perfect feedback loop — But there is no limit to Thantatos — It is a drive beyond the body cold and impersonal and empty as interstellar space — There is no climax and no rest — Once you get onto the Death side of the Orgasm-Death equation, the only possible end, as DeSade saw, is to blow up the world — ”

You mean — I screamed — we must turn back toward Love, and abandon Death as our God?

“I mean” — he said sibilantly — “the more Vietnamese babies you kill, the more you will want to kill. Tell it to LBJ.” 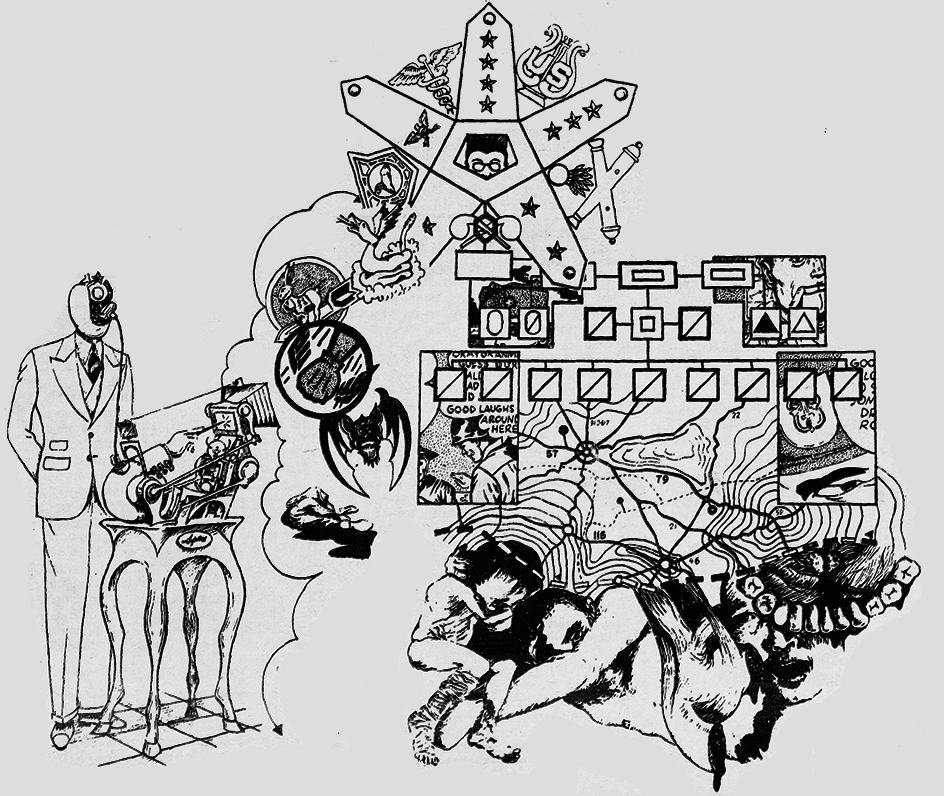 Admiral Mahan “the theorist of naval imperialism” was the first one to turn Roosevelt’s mind toward war with Japan — Mahan’s famous “inevitable chain” of industry / markets / control / naval bases, was impressed on Roosevelt’s mind toward 1914 — Roosevelt saw that control of the Pacific market was indispensible for the survival of finance capitalism, and that Japan was America’s natural antagonist there — LBJ follows today, in his China policy, the basic thinking of Roosevelt’s Japan policy, China having replaced Japan as our antagonist — His policy of seeking war through continuous provocation, forcing the enemy to fire the first shot, is derived from Roosevelt’s brilliant maneuvers leading up to the Pearl Harbor triumph —

Money-Stimulus — Stimulus to elicit a response — All money is either a commodity or a promise — Ez screaming over Rome radio — 1200 days of Sodom on the Mekong Delta — This plant actually eats insects and bits of meat! — The Signifying Monkey to elicit a response — The name of the game is Billy Budd — Harry Rumbold, hangman-god springs the trap — “God bless Captain Lyndon! ” — A voice muttering in Finnegan’s sleep screams suddenly: “Be the Viet Cong principal or be the Viet Cong agent, I will wreck my vengenance upon them! They cut off my fore-skin — I mean my leg — Librium — Miltown — Tofranil — ”

A bad dream — Kafka’s Trial is a bad dream — And history a nightmare from which we are seeking to wake — “Denham would have come! The dunce! Inane!” — “No, it wasn’t the planes — It was duty that killed the beast.” —

Money made out of nothing — A federal reserve note is a promise — It is not a commodity — Who is promising what to who? — 1200 days of Mekong on the SODOM DELTA — The judge with the stinking arse-hole — the aristocrat — The bishop screaming for babies’ blood — the money-lender — DeSade saw it all, the VIET ROCK — American life bomb went authoritarian — Obedience, the root of all evil — “The only voice Sub-Mariner can hear is the voice of the Puppet Master” — Avoid foreign entanglements. Washington’s last speech — It is a Liberal War, and that’s the worst kind — To unleash divine pentagon sources — I know no more about it — A child is being beaten. 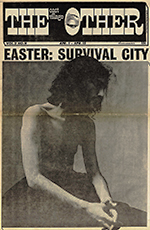