All Hail the Goddess Eris

Nobody is excluded from the Discordian Society for reasons of race, religion, politics, sex, celibacy, being a cabbage, or anything like that. Every sentient being is an Honorary Discordian. We accept you, totally whoever or whatever you are.

This leads to an inevitable objection, which helpfully leads right into the center of Discordian metaphysics.

Some of you will distrust this universal good-vibe-ism and suspect an ulterior motive. Some will be so ornery as to refuse to be incorporated just because you are being offered it with no strings attached. Others will make a principle of recalcitrance and insist that we can’t accept you without your consent.

It doesn’t matter. You are still part of the Discordian Society. You are, to be precise, in the Accordian Society, a subsect reserved for those who reject Discordianism entirely.

Discordianism includes its own opposite. like all ideas above “the abyss” in Cabalistic language. (In Discordian language, there is no abyss. That region around Da’ath and those unheimlich places in general are called the Realm of Thud.)

Thus, we worship Eris, goddess of Discord and Chaos. (See Bulfinch for all the boring details.) Since Discord needs something to be discordant with, we also worship Her sister, Aneris, patroness of the Accordian Society.

The symbol of Eris is the Apple of Discord, which she threw into a party on Olympus (thereby indirectly causing Paris to get the hots for Helen, with results described by Lady Homer in the poems plagiarized by another Greek named Homer who later got all the credit). The symbol of Aneris is the Pentagon, which represents Stability, Law’n’Order, Nixonology, the Thule Society, and all sorts of dull, respectable or patriotic forms of homicide.

Without Eris, no Aneris. Without Aneris, no Eris. Without unbalance, no progress: stagnation, death, Pasadena.

In the perpetual juggling of Eris and Aneris, Shem and Shaun, Discordian and Accordian, Hodge Podge, “our social something bumps along bumpily” (as Joyce says in the Wake) in the form of “a human (pest) cycling (pist!) and re-cycling (past).”

These stages are Chaos, or the thesis; Discord, or the antithesis; Confusion, or the synthesis; Bureaucracy, or the parenthesis; and Aftermath, or the paralysis.

Eris, as spirit of Chaos (=156 by Cabala and thereby equals Babalon in Crowley’s less sophisticated system) broods over all ages of pure Chaos. This makes certain aneristic types uneasy, leading to:

Discord, or “How the West Was Lost;” the Marshall comes in looking like Clint Eastwood and the State is established, and things get more and more regimented; thereby creating or incarnating Aneris, spirit of Organization, creating

Confusion, as everybody goes around asking “Who’s in charge here? What do I do next? Where can I hang my coat?” and things like that. Will has been divorced from body; each human is his brother’s and sister’s “keeper;” conformity and slavery thrive (and the Freudian “unconscious” is created out of all the lost Wills, baffled Desires, surrendered Needs. etc.); whereby Aneris waxeth great, promoting

Bureaucracy, which immediately begins to re-charge Eris according to the great Discordian equation

Imposition of order=escalation of chaos

and the “papyraceous formation” of Proudhon is created: tons of decrees, laws, rules, regulations etc. rain hard upon the increasingly frantic and disoriented population, leading to strikes, riots, insurrections. revolutions, anarchy and

Aftermath, in which things slowly evolve toward the original Chaos, and a new cycle starts.

So much for sociology. (Hah!) The same principles, Discordians claim (or are deluded into believing) hold throughout Existence (and Non-Existence) on all levels.

Protoplasm, for instance, is held together by the conflict of erisian forces (electrical charge, driving each colloidal particle away from all others) and anerisian forces (surface tension, drawing all the particles together). As long as this dynamic unbalance remains, the protoplasm is “alive:” life is unbalance.

On the larger scale, the galaxies seem to be maintained, as Buckminster Fuller has shown, by opposing forces of tension (expansion) and compression (contraction).

Crafty readers will easily see how this Discordian/Accordian tendency appears in the amity-enmity of religious bodies Christian, Moslem, pagan or whatever.

Everybody is part of Discordianism; I repeat. because now you are ready to understand the profundity of the joke, somewhat.

Needless to say, this atheology is an expression in language of the great spiritual truth which the Master Therion expressed mathematically in the equation 0=2.

Existence is the unreal resultant (0) of the imaginary conflict of two (2) non-existent forces.

The jewel is in the lotus: the Apple is in the Pentagon. We become what we love, but we also become what we hate. These are special cases of the general Sufi principle that we become what we passionately imagine. (Korzybski and Gurdjieff called this “passionate imagination” by the name Identification, if you are trying to translate this nonsense into one of the more familiar systems of philosophical or occult nonsense.)

Discordians do not enter into bliss like Buddhists or other low-level types like that. Entering into bliss is just another Accordian delusion, ignoring the Opposite again and thus remaining mired in Malkus on a higher level. Discordians are just as capable of entering into bliss as any other shamans, witches, magicians, yogis, dopers, artists and clowns, but Discordians are also capable of coming out of bliss and “re-incarnating.” A fully-trained Discordian adept may re-incarnate as many as twenty times a day.

It has been objected in Certain Quarters that Discordianism is a “female chauvinist” plot, because both Eris and Aneris are ladies and there don’t seem to be any male gods in this system.

This objection is easily met. Gods and goddesses, like space, time, mass, etc., are creations of the human nervous system, abstractions, symbols. (Nothing up either sleeve, you see; now watch what I do next:) Therefore, another symbolism containing the same truth is also true. Or, as Sri Syadasti said, “Truth is five but men have only one name for it.”

In our alternative symbology, Eris remains female but Aneris is only a Veil before the mystery of the true God of law’n’order, who is male. In fact, he is Eris inside-out, or Sire, the Father-spirit. Finally, in the New Aeon, Eris and Sire do a complicated 69 like Nuit and Hadit in the Stele of Revealing, and become Risers (Eris-Sire intertwined backwards), the twin spirits of Aquarian Consciousness also symbolized by Crowley’s Horus twins.

Thus, Eris (moon-goddess) is Sire (sun-god) is Risers (star-gods), as in the 0 (Nuit), 1 (Hadit), 2 (Ra-Hoor-Khuit, Hoor-Par-Krat) symbolism of the Book of the Law. Neat? The full equation, which Crowley missed, is 0=1=2. This explains all the mysteries, East and West, North and South, everywhere. 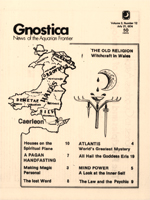 All Hail the Goddess Eris
by Robert Anton Wilson appeared in Gnostica: News of the Aquarian Frontier, Volume 3, Issue 12 in July 1974.