It is all laughing on the gallows of absolute reality.

The True The Good and The Beautiful would be perfect naming for the Platonic Ideal of a rock-and-roll group.

Anything would be a good name for a rock group, Yab-yum is Tibetan. Male and female, light and dark, creation and destruction. You can’t have one without the other.

Wig-wag are the two sides of Chin Lee, the schizophrenic symbolist poet in Terry Southern’s parable Blood of A Wig. We are all torn apart (Zagreus = “torn apart” = the secret name of Dionysus in the Mysteries) by our two sides, yab and yum, wig and wag. Ahab’s scar down the middle of his body.

Called mana by Polynesians, animal magnetism by Mesmer, orgone by Reich, prajna by the Masters of Those Who Know. Wack is also wackiness and waggery, the wig-wack again. Weck is the conversion of electricity to water, or electric power to water power in my Kwannon statue. But the electricity itself might be generated by a waterfall, water energy first becoming electric energy, then restored to water-energy in the statue-fountain in my pad.

Nothing is impossible in a so-called universe where such transformations (water = electricity = water) are possible. Hence the last words of Hassan i Sabbah: “Nothing is true, everything is possible.” Black monolith forty feet under the moon, waiting four million years. The Great (Maha) Mantra of Mrs. Eddy tells us: “There is no truth, substance, life or reality in matter; all is infinite mind and its infinite manifestation. The Amerind god, Wakan Tanka, usually mistranslated Great Spirit, really means Father of Energy. At the last stage of training Thucultists are told “There is no Kali; all that exists is your own mind.” The same secret revealed by Hassan i Sabbah to the Assassins. And the Arabic cult of the Horned One (the moon god has two horns as shown in Chinese 牛 or in our crescent) called him Rabban (Our Lord), from which came the Robin of the witch cult in Europe, Robin Goodfellow, and Robin Hood the first anarchist.

Never ignore the buried truths of language. Expressions like “a noble shit” or “an everyday miracle” attest that all men have known the Burning House of Buddha and Heracleitus, the combustion of the universe by weckwack (energy), the dance of Kali.

Not for nothing did Scotus Erigena say OMNIA QIJIA SUNT LUMINA SUNT, all things that are, are lights. And they burned him as a Manichean, 400 years after his death. The Chinese symbol for intelligence, just as in Kubrick’s personal poetry of 2001: A Space Odyssey, is the sun and moon together, lined up. Which is why we say “You’re bright” when we compliment a man on his intelligence.

“And the light lived in the darkness, and the darkness knew it not.” They crucified Manes, founder of Manicheanism, and tanned-and-stuffed his corpse, but he escaped them into the White Light of the Void.

Pound and Joyce saw the insect-eyes of Minraud turned upon us before Burroughs or Kubrick. Pound: “When the mind swings by a grassblade/an ant’s forefoot shall save you.” And Joyce: “In the buggining was the Woid.”

The Fourth Patriarch said, “Buddha is dung.” And Antonin Artaud writing from the madhouse told the Paris intellectuals: “I say shit to everything.”

A noble shit and an everyday miracle, weck-wack, wig-wag, and yab-yum.

“Fool, fool, what a thrice-accursed fool has Ahab been.” Zagreus, torn apart, torn apart eternally, the dual unity. Yab-yum, wig-wag, weck-wack, a tale tolled of stem and stone, a tale told of Shem and Shaun.

Leopards, lynxex, all large cats are sacred to Zagreus. “Did he who made the lamb make thee?”

The witches, like Siberian shamans, went out via the toadstool, amanita muscaria (fly agaric). The Lord of the Flies: insect eyes of Minraud, from outer space. Outer space and inner space are the same voyage.

“Toad that under cold stone/Days and nights hath thirty-one.” (Macbeth). The weird sisters = the triple moon goddess = Kali as mother, wife, daughter. The hemp yields both the noose of the Thugee and the smoke of the assassins. It is a lady, Maria Juana, used by witches in Ireland for centuries. The favored drug of the Italian witches was Bella Donna, beautiful lady.

Toadskin yields bufotonin, a cousin of serotonin, and smack dab in the middle of both the Indole Ring, just like the round eye of HAL-9000. “When you look into the abyss, the abyss also looks into you.” “The eye with which I see God is the eye with which God sees me.” (Eckhart).

The Lord of the Rings rules over Mordor, i.e., merde and murder. “I say shit to everything!” (Artaud). But the One Ring is in custody of Frodo Baggins, and he, too, returns home after meeting the elves, orcs, demons, archetype of the schitzy trip.

But the whole meaning of 2001 is in Dante: “All under the Moon, is under Fortuna … The light shines in some parts more, in others less … The Love that moves the sun and other stars … The Will that wills that all its ways shall not be understood.”

Subtitle: A Space Odyssey. An odyssey is odd, I see, but it’s a return home. The voyager goes back to his house, the “terrible ox-killing house of love.”

Jung had a patient circa 1930 who dreamed a voice crying out “We must rebuild the ape.” Telepathic vibrations from Los Angeles, city of lost Angels, where Merriam Cooper was plotting to un-leash King Kong at that time?

The voyager returns. The hero with a thousand faces, Joe Campbell’s mono-myth, goes through alienation and return to the tribe. Schizophrenia = splitting apart, splitting the scene, stepping out of the tribal games. Zagreus, torn apart.

We must rebuild the ape: return, return, return O voyager; look homeward, angel. Rebirth is your reward. “A little child shall lead them.”

The Mayans discovered zero and promptly left their cities for nature. The cities were empty before the Spanish conquest.

The ending of 2001 is schitzy as well as trippy, because the wigs are turned on to the eyes of Minraud, the eyes of interstellar space.

The HOD questionaire (Hoffer-Osmund Diagnostic Test) to spot wigs has such true/false statements as: “People’s eyes seem very piercing” “I sometimes feel I have left my body” “My mind is racing away from me” “I am not sure who I am” “I find that past, present and future are all muddled up”. Those who agree with most of these statements are schitzy (split) or wigs. The hero of 2001 goes through all of these in the last 20 minutes or so.

“I’m splitting this scene.” “I don’t want no more of the Death Universe” (Burroughs), “There’s a hell of a good universe next door” (Cummings). But the hero returns to the tribe, the odyssey ends at home Homer knew. Not just the Lotus-eaters, but Circe: kaka pharmak edoken – she gave them dreadful drugs.

Circe, the “fair-tressed goddess”: Maria Juana, Bella Donna, the nightmare life-in-death is she.

The monolith is black, death-color, like Mordor. Only in passing through the monolith (passing through death) as the voyager ages and dies before our eyes, do we reach the re-birth, the child who is the last image on the screen.

“unto us a child is born”. The womb-tomb express runs both ways – it is also a tomb-womb express. 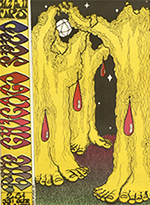